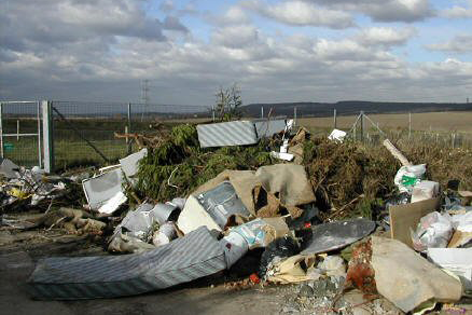 A public consultation on the possible introduction of fixed penalty notices to combat fly-tipping has been launched by the Welsh Government.

Currently, local authorities can issue fixed penalty notices for a number of offences, such as littering and dog fouling. The only way to penalise those who undertake small scale fly-tipping though is to prosecute through the Magistrate Courts.

Many consider this to be expensive, time-consuming and disproportionate for small-scale offences.

The majority of respondents to a previous consultation felt introducing fixed penalty notices offered a relatively simple, quick and cheap way of dealing with offenders, which would remove existing financial and resource burdens on enforcing authorities and on the Court system, the Welsh Government says.

The 12-week consultation launched today (12 January) proposes councils should have the ability to set the fixed penalty amount at between £150 and £400, depending on their local circumstances.

If no amount is specified then the default would be £200, it says. Local authorities could then use the money raised to help contribute to the costs of enforcement and the clear-up of fly-tipping.

Larger fly-tipping incidents such as a van tipping a load of building waste would still be prosecuted through the courts.

The Cabinet Secretary for Environment and Rural Affairs welcomed the launch of the consultation.

Lesley Griffiths said: “Fly-tipping is undoubtedly one of those lower-level offences that generates much discussion and discontent among the public.  It is unsightly, environmentally unfriendly and it creates extra work for the people who have to clear it up.

“The purpose of the consultation we are launching today is to gain the views of all interested parties on our proposal to give local authorities the power to introduce fixed penalty notices. The conversations we’ve had so far indicates this is a measure that would prove to be popular among the public but we need to ensure if we are going to pursue this option that it is proportionate and workable.

“I hope as many people as possible take the opportunity to respond to the consultation and play their part in developing a system that helps to reduce waste crime and improve the appearance of communities across Wales”.

The Welsh Government’s “A Fly-tipping Free Wales: Our Strategy for Tackling Fly-tipping 2015” gave a commitment to investigate the introduction of Fixed Penalty Notices (FPN) or other enforcement tools to help tackle fly-tipping incidents.

In 2015 the Welsh Government undertook with a consultation with Defra and joint call for evidence, seeking views on a range of measures related to waste crime, including the introduction of FPNs for fly-tipping.

FPNs for small scale fly-tipping was introduced in England during May 2016. It is currently too early to assess the impact of this change to waste offence enforcement, the Welsh Government says. However, recent figures show that fines for fly-tipping in England total over £400,000 since the new powers were introduced.

The 12 week consultation is seeking to strengthen the involvement of stakeholders particularly those involved with or affected by waste crime which will shape the final FPN arrangements for Wales.

The consultation is available HERE