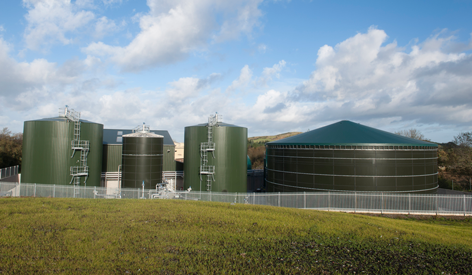 The Welsh Government has provided almost £2.4m in initial funding to support the project. Built by Biogen on Gwynedd Council land, the plant will process food waste collected from local homes and businesses by the council, diverting it from landfill to produce renewable energy and valuable biofertiliser for local farmland.

The First Minister said: “Prosiect GwyriAD demonstrates what can be achieved by the Welsh Government working closely with the local council and the project team. Wales is the only country in the UK with a national programme to address household food waste, and we have provided leadership to local government and the market with our ambitions, as well as significant funding.

“Thanks to Prosiect GwyriAD, 11,000 tonnes of waste a year will avoid landfill, where it would generate greenhouse gas emissions. Instead, the plant has created jobs locally and generates 3,500 megawatt hours of renewable electricity for the national grid – enough to power every home in nearby Penygroes continually for a year.”

Carwyn Jones – “Wales is the only country in the UK with a national programme to address household food waste, and we have provided leadership to local government and the market with our ambitions, as well as significant funding”

Gwynedd Council’s Cabinet Member for Environment, Councillor Gareth Roberts said: “We are very proud that the GwyriAD plant is now fully operational – it is the first facility of its kind delivered by a Welsh Council and underlines Gwynedd’s commitment to finding new green ways of dealing with the county’s food waste.

“As well as processing more than 150 tonnes of household food waste every week in a sustainable and responsible manner, the GwyriAD plant will also produce natural biofertiliser to be used on local farmland and produce green electricity.”

John Ibbett, Biogen Chairman, said: “We are very proud to have been involved with this pathfinder project. Thanks to the foresight of the Welsh Government, the investment from Iona Capital and Biogen’s strong working partnership with Gwynedd Council, the GwryiAD plant is now making a valuable contribution to sustainable waste disposal and renewable energy supply in Wales.”

The plant has been financed by Gwynedd Council, BIOGEN, Iona Capital and the Welsh Government.