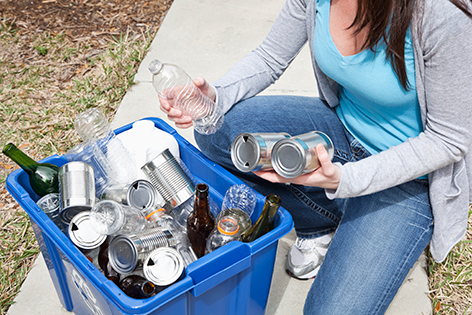 Women are better at domestic refuse recycling than men according to a household survey carried out by a British waste management company.

BusinessWaste.co.uk says that while nationwide recycling figures are up, women lead the way in making sure that waste is properly sorted.

“Overall, just less than half of all refuse in the United Kingdom is recycled,” said BusinessWaste.co.uk spokesman Mark Hall, “but when you break it down to how households behave, the men are lagging well behind.”

Mark Hall, BusinessWaste.co.uk – “First, we’re amazed that more than twice as many women take the lead in recycling than men. Second, one-fifth of households admitted they don’t bother recycling at all. Scaled up to national levels, that’s literally millions of households”

BusinessWaste.co.uk surveyed households around the country, and asked: “If your local authority has a recycling scheme, who is more likely to ensure that your waste is correctly sorted?”

“First, we’re amazed that more than twice as many women take the lead in recycling than men,” Hall said, “Second, one-fifth of households admitted they don’t bother recycling at all. Scaled up to national levels, that’s literally millions of households.”

Asked who was more likely to put the bins out, the answers were:

BusinessWaste.co.uk say they explored the gender divide further, and found that when it came to taking refuse to the tip, 78 percent of households said a man performed the task.

The UK based company thinks that this male-female divide in household recycling duties go against perceived wisdom that gender divisions are disappearing in British homes, findings that are backed up by last year’s massive Understanding Society survey.

The 2013 survey concluded that women take on the bulk of household chores, especially when living with a male partner. While men were happy to do the more energetic jobs, such as taking bins out, it was the women who were far more likely to be rinsing, emptying and sorting waste for recycling.

“We can coin a phrase here, and say that ‘There’s truth in what we throw away’,” said BusinessWaste.co.uk ’s Mark Hall, “and the truth is that women are just far more organised with rubbish than their male partners.”