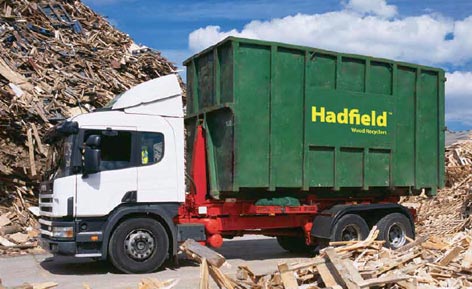 The contract will see Hadfield’s continue to recycle around 35,000 tonnes of wood a year from Viridor’s network of twenty Household Waste Recycling Centres (HWRCs) around Greater Manchester operated by Viridor on behalf of Greater Manchester Waste Disposal Authority.

The Droylsden-based wood recycler, which also has sites in Middlesbrough and Essex, has been operating the contract since 2004 and has seen the amount of wood being recycled increase from 7,000 tonnes a year to the current 35,000 tonnes.

Vicki Hughes, group business development director for Hadfield Wood Recyclers, said: “We have been working with Viridor and its predecessor for a number of years now and have seen a huge increase in the amount of waste wood being diverted from landfill and sent to us for recycling.

“We have done a lot of training on their sites to educate operatives as to what waste wood materials can be recycled and this has definitely contributed to the growth, along with a general increase in recycling awareness overall.”

Vicki Hughes, Hadfield Wood Recyclers – “We have been working with Viridor and its predecessor for a number of years now and have seen a huge increase in the amount of waste wood being diverted from landfill and sent to us for recycling”

Patrick Killeen, operations manager at Viridor added: “As part of the Greater Manchester Recycling and Waste Management Contract with the Greater Manchester Waste Disposal Authority we are aiming to achieve a recycling rate of 50 percent and will be diverting at least 75 percent of waste away from landfill, by 2015. Hadfield Wood Recyclers has played a key part in assisting us meet this target and we look forward to further developing this relationship in the future.”

Since winning the original contract in 2004, Hadfield Wood Recyclers has adapted its services at its Manchester site to accommodate the growing needs of Viridor.

This has included extending its opening hours at weekends, bank holidays and during the summer, and providing a dedicated customer support team for this and other big contracts.

The company is currently expanding its Manchester site by a further six acres to allow it to grow further. It has also recently secured a 12-year exclusive agreement to process waste wood into Tilbury Docks, Essex after investing in a new facility on the site.

Hadfield Wood Recyclers is currently looking for other sites around the country to increase its ability to collect and recycle waste wood from all sectors.