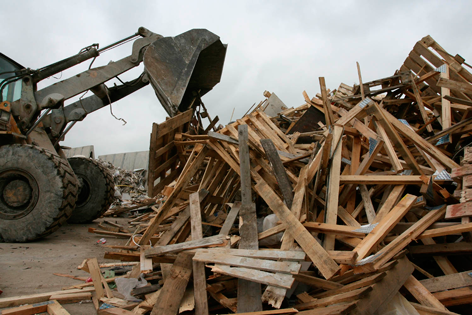 The Wood Recyclers Association (WRA) is calling on the Environment Agency to clarify its position on bespoke permits under new FPP guidance for the UK’s wood waste sector, following fears it could seriously damage the industry.

In an e-bulletin sent out last week, the Environment Agency (EA) stated a number of changes to the proposed FPP guidance version three, which is due to be published at the end of this month. These  include reducing the height of stack sizes for combustible material to four metres, a decrease in four metres from the original TGN 7.01 guidance, and allowing a maximum storage time of six months for all materials.

Andy Hill, Chair of the WRA which has been campaigning for more flexibility within the FPP guidance, said such moves would seriously threaten some parts of the industry including the biomass sector, which requires large quantities of materials to be stored to allow power plants to function.

“Reducing the stack height to four metres would mean some businesses needing to expand their sites by three or four times the size to be able to hold the required quantity of material, so for the EA to say these changes will have no impact on businesses is ludicrous. We believe prevention is the key, combined with high standards of site management and the ability for operators to quickly isolate material to cut off the fuel supply in the event of a fire breaking out. With the right measures in place we would like to see the allowance of higher stack sizes in bespoke permits.

“Our worry is not that standard permit rules won’t work for small scale operators. The problem lies in the fact EA officers then use these guidelines as the benchmark when considering bespoke permits, and that is where the danger is.

“To date the approval of bespoke permits has been flawed. This uncertainty is simply unacceptable for a material sector which will realise a 25% uplift in end-user demand over the next two years with an additional 1.3 million tonnes of power plant capacity being built now,” he added.

Time To Engage With Industry

He added the WRA feels it is imperative the Agency engages with industry now to confirm and demonstrate that bespoke permit applications will be considered and supported with clear, flexible and risk based evidence. “The EA has a duty to ensure their activities support those that they regulate not only to comply but to grow. This growth is paramount given the additional end user capacity coming on line shortly.

“We are also disappointed to see a proposal of a maximum of six months storage time for materials, which we believe is unnecessary for unprocessed wood, has no scientific evidence to support it and does not take into account the seasonal impact in the waste wood industry.”

The WRA is also questioning information provided by the EA in the bulletin about estimated cost savings to the fire and rescue service under the new FPP guidance.

“The fire service is on call 24 hours a day, seven days a week,” said Andy. “So it is not credible to count these hours as a direct cost saving. It is purely playing with numbers.”

He added: “We understand and agree with the need to reduce the number of waste fires and their impact. However we believe the new FPP is still going to be too prescriptive and not take into account the needs of larger businesses, many of which having put strategies and tools in place to offer bespoke fire safety measures as part of a bespoke permit.

“We would therefore urgently seek clarity and reassurance from the EA that when bespoke permits are applied for officers will have the knowledge, training and flexibility to look at cases on an individual basis and we would like that flexibility to be built into the FPP with guidance for officers on what they can allow. We would also like scientific evidence to support their need for a four hour burn time and the storage limits they are proposing as we don’t believe they are necessary.

“We have offered the EA the opportunity to visit some of our members’s sites to gain an understanding of what we want to achieve with them and we are willing to make that offer again now, before the new FPP is published and we are back to square one.”