In the run up to one of the busiest times of the year for food producers, retailers and charities, ReFood has launched a campaign to reduce business food waste and donate money to homeless charities.

The business, which has a number of anaerobic digestion (AD) plants throughout the UK contributed £4,000 to charities and diverted an additional 192 tonnes of waste food away from landfill during a similar campaign last year.

“This campaign highlights two important issues over the festive period: homelessness and wastefulness.”

This year’s project will see donations made to homeless charities for every new bin collection signed up during November, December and January.

The charities involved in the initiative all work with homeless, vulnerable people, an issue that comes into particular focus around Christmas. Leeds-based St George’s Crypt; Manchester charity Barnabus; independent, Liverpool-based charity The Whitechapel Centre; SHP in Dagenham; and Sheffield’s Sunday Centre, will all receive financial support from the campaign.

Over last year’s busy winter months, ReFood provided waste collection services to a total of 2,566 new businesses, meaning that significant amounts were raised for the chosen causes. The campaign also prevented an additional 192 tonnes of food waste from going to landfill, reducing carbon emissions equivalent to the average produced by a household over a 40-year period. 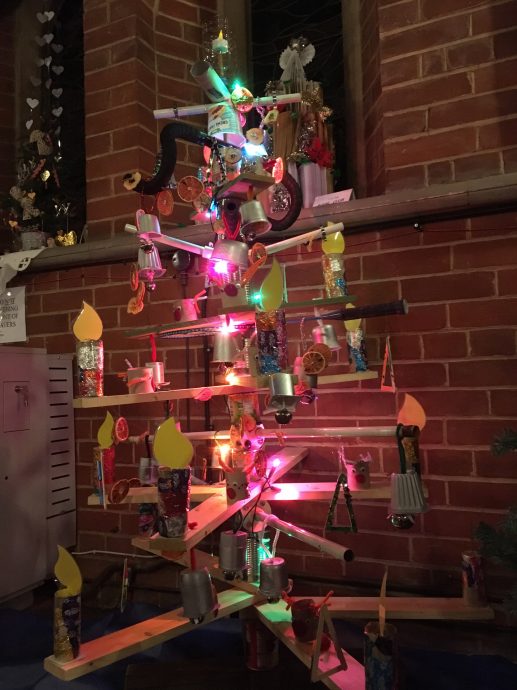 taff at Biowood Recycling has been helping local children learn about the benefits of recycling by providing them with their very own Christmas tree with a difference this year – made entirely from waste materials.

The five-and-a-half-foot tree was designed and constructed by Biowood’s Commercial Director John Walls, using items that would have otherwise have been collected by the council for recycling or sending to landfill.

“2016 has seen a dramatic increase in the amount of non-wood waste that Biowood has handled and now it contributes to approximately 50% of our total business,” he said. “At this time of year especially, we (as a nation) create an extraordinary amount of waste, and it occurred to me that it might be an appropriate time to really drive the message home about how we can all do more to prevent household waste being sent to landfill” said Mr Walls.

“My daughter’s Pre-School enters a Christmas tree in the local festival every year and I thought that it might be an interesting way to showcase everyday waste in a different form, whilst highlighting recycling and re-use as an important issue”.

The tree, which has been constructed purely from items that were destined for the wheelie bins, ingeniously combines an old snooker cue, broken gazebo poles, a battered old badminton racquet and even some defunct racing bike handlebars! Various bits of waste wood, tin cans and plastic packaging also feature in the design.

The children from Cranmer Pre-School in Aslockton, Nottinghamshire have also been busy creating decorations to hang on the tree, from more household waste items such as yoghurt pots and toilet roll tubes.

The tree will be on display at Aslockton Church during December as part of their Christmas Tree Festival, and after that will be taken to Biowood’s offices in Ilkeston, Derbyshire where it will be displayed with pride for many Christmases to come! 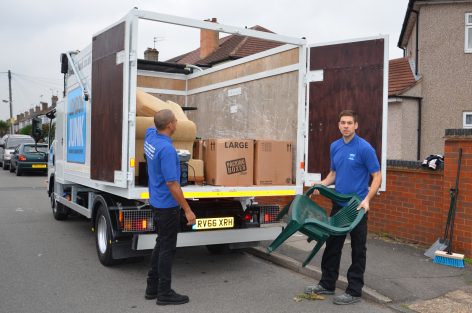 A London waste company is offering the ultimate gift for a City high-flier – the chance to get elbow deep in the capital’s rubbish.

The company expects the £300 gift to be popular with “pampered execs eager to get their hands dirty for the first time in their lives.”

They will be expected to muck in and collect rubbish from locations all over London, sort it and unload it at a recycling centre.

“We believe our Waste Collection Experience Day Gift Package is the first of its kind in the world and we are expecting to be fully booked after the Christmas holidays.”

They will learn a lot about the materials Londoners throw away and they will even be allowed to choose an item they collected to take home as a souvenir of the day.

They will then join one of London Junk’s two man crews on board one of a shiny fleet of refuse collection trucks which operate across the city.

The gift day will then see them drive to various commercial and domestic collection points where they will be expected to roll up their sleeves and work hard at loading waste into the truck.

At the end of the day they will be expected to wash down the van before heading home clutching their prized souvenir.

A spokesman for London Junk said they were expecting strong demand for the gift package from CEOs and top executives.

He said: “What do you give the man who has everything? How about the chance to experience hard physical graft and the opportunity to see a whole different side to London?

“We believe our Waste Collection Experience Day Gift Package is the first of its kind in the world and we are expecting to be fully booked after the Christmas holidays.” 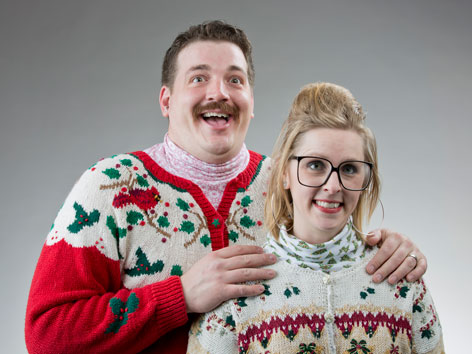 WasteAid UK is launching a festive fundraiser that helps people reduce their environmental impact at Christmas by buying a secondhand Christmas jumper.

Zoë Lenkiewicz of WasteAid said: “Consumer campaign Love Your Clothes found that over 10m people in the UK are likely to buy a Christmas jumper and 40% will wear them just once or twice. The revenue generated from the sale of Christmas jumpers in the UK last year was £300m. At WasteAid we thought some of that money could be better spent helping tackle the global waste crisis, so we’ve launched the Happy Christmas Jumper Swap.”

How does it work?

Results: Mary looks awesome in her new reindeer jumper, Peter’s cleared some clutter, and everyone can be happy that they’re supporting a hard-working charity at Christmas.

Everyone is invited to take part and help raise money for WasteAid UK. Half the world’s waste doesn’t get collected, and open dumping and burning is damaging to people’s health and the environment they depend upon.

“The revenue generated from the sale of Christmas jumpers in the UK last year was £300m. At WasteAid we thought some of that money could be better spent helping tackle the global waste crisis, so we’ve launched the Happy Christmas Jumper Swap.”

Mike Webster of WasteAid UK said: “WasteAid is the waste management sector’s response to the global waste crisis. Running for just over a year, we have worked with partners in nine countries, developed 34 community recycling facilities, trained 363 recycling entrepreneurs and positively impacted the lives of 124,000 people.

“More partners in developing countries are waiting to work with WasteAid. All that is needed is the funding.”

WasteAid recently launched a project backed by the Chartered Institution of Wastes Management, to develop a guide book to simple reprocessing technologies. Once complete, this guide book will help communities all over the world to sort their waste problem and support sustainable livelihoods.

Save Money And Waste Less This Christmas 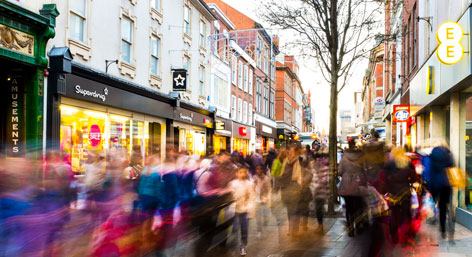 Merseyside Recycling and Waste Authority (MRWA) recycling officers are asking people to shop smart this Christmas in a bid to save money and create less waste.

December can be a time when we tend to overindulge, that’s why Merseyside Recycling and Waste Authority have come up with tips to follow so local residents can slim their shopping, cut their clutter and make their money go further.