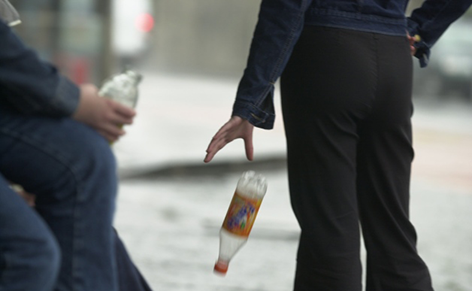 Women under the age of 34 are more likely to drop litter in the streets, even if there is a rubbish receptacle nearby, according to a recent survey.

Based on both a phone survey and a period of street observations BusinessWaste.co.uk says that women under the age of 34 are the worst culprits from dropping litter in the streets.

Young men are not far behind woman, and women over the age of 50 are least likely to drop litter, according to the survey results.

“Young people are often slated for a lack of respect,” said BusinessWaste.co.uk spokesman Mark Hall, “and sadly, our survey tends to back this up.”

Mark Hall, Businesswaste.co.uk – “It seems that everybody’s guilty, but some people are more guilty than others… And we think that where education’s failing, more on-the-spot fines will succeed”

Asked why they dropped litter in the street, respondents claimed that the lack bins (or the fact that existing bins were full) was a major factor for their behaviour.

Others said that while they were aware of the fact they could be fined, it was a risk worth taking because – as one person said: “I’ve never once met anybody who’s ever been caught”.

The worst age groups for dropping litter, according to the phone and observational poll involving over 2500 UK residents conducted on behalf of BusinessWaste.co.uk were:

The best age groups are:

Observations found that the most likely litter dropped by the two worst groups – both men and women under the age of 34 – were:

“It’s almost like the message about anti-social behaviour hasn’t got through”, said Hall, “cigarette butts and chocolate wrappers have littered our streets for decades, and it’s a bad habit that people just can’t shake.”

“It seems that everybody’s guilty, but some people are more guilty than others,” said Hall. “And we think that where education’s failing, more on-the-spot fines will succeed.”