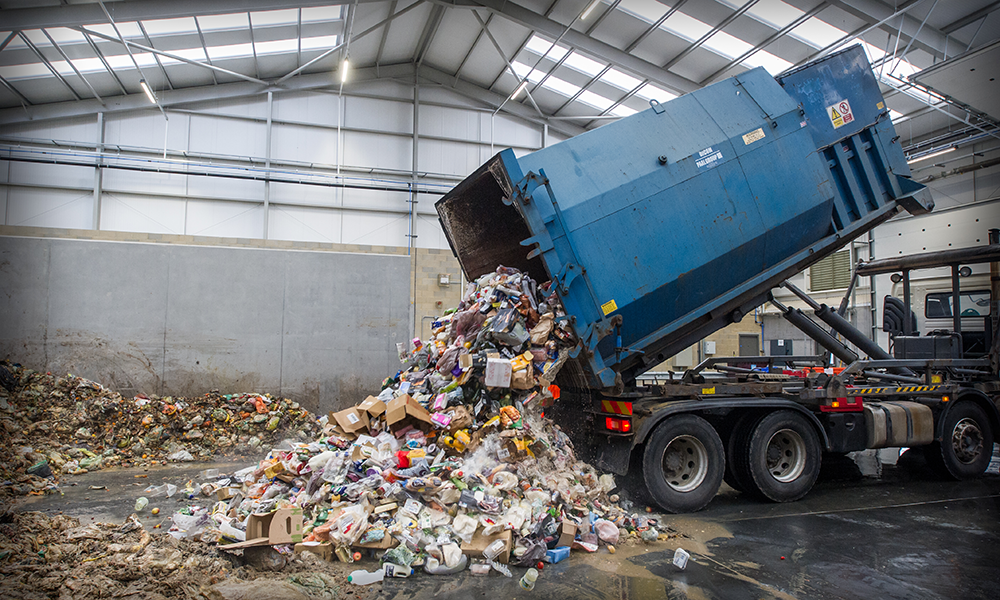 Designing the right collection vehicles to make food-waste recycling easier is crucial, so the compartments and make-up of vehicles have to adapt to changing needs, writes Chris Elliott

In the crusade to create a circular economy, where what we make is given fresh life in a cycle of regeneration and restoration, tackling food waste is a key priority.

The UK produces 10 million tonnes of it each year, with households responsible for three-quarters of that – and much is still being tipped into landfill to rot away beneath the surface.

Last December, the government published its long-heralded resources and waste strategy for England, meant to kick-start recycling rates which, having risen from 11 per cent in 2001 to 43 per cent a decade later, have now plateaued.

The aim is to ensure ‘every householder and appropriate businesses have a weekly separate food-waste collection’, Defra says.

How is that going to be achieved? At present, many local councils pick up green waste once a fortnight, with garden refuse, like fallen leaves and grass cuttings, and food waste – such as uneaten meals scraped off plates and out-of-date fruit and veg – collected together in the same bin. The combined waste is taken to recycling centres for conversion into compost.

Every tonne of food waste recycled by anaerobic digestion as an alternative to landfill prevents between 0.5 and one tonne of CO2 entering the atmosphere

But a growing number of authorities are looking at the benefits of separating food from other green waste. Food waste, treated separately, can be transformed not only into fertiliser, but also into biogas that can be used as fuel.

Spearheading this transformation are companies like Biogen, which operates more than a dozen anaerobic digestion plants nationwide. The food breaks down into sludge, carbon dioxide and methane.

Iain Pickles, Biogen’s head of sales, says: ‘It takes two to three months and happens in a sealed, oxygen-free tank called an anaerobic digester. The biogas created in the tanks is used as a fuel in a combined heat and power (CHP) unit to generate renewable energy – electricity and heat.

‘What’s left from the process is a nutrient-rich biofertiliser, which is pasteurised to kill any pathogens and then stored in large covered tanks, ready to be applied twice a year on farmland in place of fossil fuel-derived fertilisers.

‘Every tonne of food waste recycled by anaerobic digestion as an alternative to landfill prevents between 0.5 and one tonne of CO2 entering the atmosphere.’

Pickles adds: ‘Biogen has contracts with councils, where we charge a gate fee per tonne, and they either deliver the waste to our plants or it’s picked up. The price we charge is significantly less than the cost of putting material into landfill, and the electricity is sold to the National Grid, with farmers taking the fertilisers.’

He believes many householders support the idea of weekly food-waste collections: ‘Some have concerns about leaving food in their bins for a fortnight between collections, especially during hot weather,’ he says. ‘In view of the benefits of anaerobic digestion, we see it as a very important part of the government’s waste strategy.’

Food waste isn’t like other kinds of recyclable material. It’s relatively dense, can’t be compacted without producing a lot of liquid, and can be corrosive. Designing the right collection vehicles to make recycling it easier is crucial, according to resource efficiency organisation Wrap. It has published a detailed guide on food-waste collection, the trucks used, and how they should be operated.

First, vehicles must comply with the Animal By-Products Regulations (ABPR). They need to be leak-proof, have apertures that close when not being loaded and, when unloading, they must tip into a secure area either at a treatment facility or an intermediate bulking point.

Wrap says: ‘Ideally, food waste should be collected in one load. A separate food-waste collection vehicle with a typical payload of 2.5 tonnes is unlikely to require more than one tip per day in an urban setting, with a driver plus one loader working a standard 7.5-hour shift. Vehicles may need extra capacity if they cover schools or businesses.

‘Loading times can be maximised if the vehicle can be loaded simultaneously with a bin lift for wheeled bins, and manually by crew members. Having a number of low-level, easy-access loading points enables crews to achieve a high pick rate.’

What sort of vehicle a council chooses depends on its existing fleet, and local circumstances.

There are vehicles for the collection of food waste only, and vehicles that cater for food waste alongside other materials. There are plus points for both types of truck: specialised, separate food-collection vehicles have lower running costs than traditional RCVs, and co-collection trucks – where food is picked up alongside other recyclables – cut the number of vehicles required and boost efficiency.

Before committing to a certain type, councils are advised to seek feedback from other authorities with experience of using different vehicles, and to road test them.

One local authority leading the way in recycling food waste is the Royal Borough of Kingston upon Thames. It has 10 vehicles designated for food collection, and has opted for specially designed ‘split back’ trucks.

A council spokesman says: ‘The trucks have two separate compartments. The first compartment is for dry recycling materials, either for paper and card or for tins, glass, plastics and cartons, depending on which materials are being collected that week. The second smaller compartment is for food waste. This allows one vehicle to collect all the recycling from a house in one visit.

‘Our crews pick up food-waste caddies from the front boundary of front gardens, unlock them and empty them into specific transfer wheelie bins. They do this for a few houses before taking the bin full of food waste to the truck. They attach the bin to the back of the vehicle and use the mechanical lift to tip the contents of the bin into the back of the truck.’

Claire Shrewsbury, head of programmes at Wrap, says: ‘The choice of collection vehicles and how they are operated by crews is critical in developing efficient and cost-effective food-waste collection services. It’s important to look at the whole collections system, including vehicle and container design, operational delivery, service efficiency and implementation to consumers. These are all key to achieving high-performing, lower-cost collections.’

Terberg has made great strides in producing trucks to suit individual needs. The company’s aluminium-bodied toploader vehicle (ABTL) was originally developed for the animal by-products industry, collecting from places such as abattoirs, but has morphed into a food-waste collection workhorse as demand has increased. Because they are widely used for commercial collections, ABTLs are big – either 18-tonne with a 4×2 chassis or 26-tonne with a 6×2 rear-steer chassis – but they are lightweight and long-lasting as well.

Terberg, as a division of Dennis Eagle, is the only manufacturer that makes a complete aluminium-bodied vehicle – body, bin-lift and Dennis Eagle chassis. Waste is dropped in from above and forms a heap that gravity, plus vibration of the vehicle on the road, helpfully spreads out. Some trucks have two lifts – rear and roadside – and, sometimes, operators will use them for domestic collections, with a slave bin attached to a lift on the back.

Terberg also offers the plastic-bodied utility vehicle (PBUV), made of tough UV-resistant polypropylene, mounted on a 7.5- to 10-tonne chassis from a range of manufacturers, including Isuzu, Fuso and DAF. The PBUV uses TL360 lifts for two-wheeled domestic bins and can also be used for hand-loading. There are two body sizes, 6.5- and 8.5-tonne, with a payload of 2.75 tonnes.

Will Marzano, managing director at Terberg Matec UK, says: ‘It’s a worker bee, good for quick and efficient domestic food-waste collections. Local authorities often buy these when they are introducing food waste as a new service. They are relatively low-cost, so easy to add to their existing fleets.’

Dennis Eagle markets two trucks – the Duo and One Pass. They have either one main body chamber or two independently operated chambers, and a pod, which sits between the body and the cab, and can be used for food waste, with top or side emptying.

As products will inevitably rise and fall at the kerbside, and producers package and post in different ways, I think the compartments and make-up of our vehicle will have to change to adapt to these trends

Marzano says: ‘Our ABTLs and PBUVs are used by some of the biggest names in the industry, such as Veolia and Biffa, and local authorities across the UK.

‘Leading contract hire companies, such as Riverside and SFS, and contractors like FCC also use them – and we’re exporting them too, to Dubai, the Netherlands and to Belgium.

‘There’s still a big appetite for food-waste collection in the UK. Local authorities with recycling targets are coming on board with food waste all the time. Private businesses generating food waste also want to be seen as environmentally sensitive – and nobody wants to pay high landfill costs.’

Irish-based manufacturer Romaquip has developed an elegant truck called Kerb-Sort, which is proving popular in many areas, with more than 40 councils and private companies on its client list. The vehicle, which has a number of compartments, can pick up a range of materials in addition to food waste, including plastic, paper, cardboard and glass. The stainless steel food-waste compartment is loaded and unloaded hydraulically.

Matt Patanden, head of sales for the firm’s UK operations, says: ‘As reprocessors become more aware of quality over volume/weight collections, the box collection method is becoming more and more popular. Over the next two to five years, we’ll be looking to see more local authorities move across to a source-segregated service over a commingled approach.’

The company’s expert engineers are looking to the future and may adapt the vehicle as circumstances dictate. Patanden says: ‘We’re now seeing trials of film collected separately, cartons/Tetra Pak, and the possibilities surrounding items such as cooking oil and compostables in the future.

‘As products will inevitably rise and fall at the kerbside, and producers package and post in different ways, I think the compartments and make-up of our vehicle will have to change to adapt to these trends.’

This feature first appeared in the July/August issue of Circular.

Alt diesel | the search for alternatives is becoming more pressing