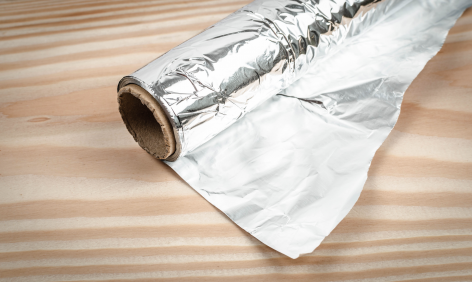 Ahmed Osman, from Queen’s University’s School of Chemistry and Chemical Engineering in Belfast, says he has established a technique to convert contaminated household aluminium foil, discarded after cooking, into a pure chemical catalyst used to speed up the process of making green fuels such as dimethyl ether.

The Belfast university highlighted that around 20,000 tonnes of aluminium foil packaging is wasted each year – enough to stretch to the moon and back.

Most of this is landfilled or incinerated as it is usually contaminated by grease and oils, which can damage recycling equipment.

“This breakthrough is significant as not only is the alumina more pure than its commercial counterpart, it could also reduce the amount of aluminium foil going to landfill while also sidestepping the environmental damage associated with mining bauxite.”

Working with Queen’s engineers, Mr Osman has developed a crystallisation method to obtain pure aluminium salt crystals from the foil.

The crystals can be used in the production of alumina biofuel catalyst.

That type of alumina usually comes from bauxite ore, which is mined in places such as West Africa, the West Indies and Australia, with major environmental consequences.

Mr Osman, who took on the project under the university’s Sustainable Energy, Pioneering Research Programme, believes he has created a solution that is more environmentally-friendly, effective and cheaper than the commercial catalyst.

His research has been published in Nature Scientific Reports.

“I have always been inspired by chemistry and I believe that catalysis especially can make the world a better place,” said Mr Ahmed.

“One day I took a walk through our laboratories at Queen’s and found lots of aluminium foil waste so I did a little digging and after speaking to my colleagues, I ran my experiment and was astonished by the ultrapure single crystals – I didn’t expect it to be 100% pure.

“At Queen’s, our scientists and engineers often work hand in hand on common challenging problems for the society.

“By using our joint expertise, we have been able to tackle the issue of sustainable development and come up with a research solution which lies in an area between chemistry and chemical engineering.

“This breakthrough is significant as not only is the alumina more pure than its commercial counterpart, it could also reduce the amount of aluminium foil going to landfill while also sidestepping the environmental damage associated with mining bauxite.”

The university recently announced that it has received EU funding of over €9.3m that will create a “virtual centre of competence” to support cross-border research into bio-energy and marine-based renewable energy sources.

“Advanced research on Renewable Energy is a very worthwhile project and this work will contribute many benefits, including a long term legacy for the future.”

Working with a number of cross-border partners including the University of Highlands and Islands, Letterkenny Institute of Technology, Ulster University, the Agri-Food & Biosciences Institute, Donegal County Council and Dumfries and Galloway Council, the project will create the largest amount of cross-border research in this specific area to date.

The project will focus on bio energy specifically heat, biogas and electricity which can be produced through the anaerobic digestion of agri-food waste. The research findings produced will benefit many SMEs struggling to enhance their innovation capacity within the renewable energy sector.

Match-funding for the project has been provided by the Department of Jobs, Enterprise and Innovation in Ireland and the Department for the Economy in Northern Ireland.

Welcoming the project Ireland’s Minister for Jobs, Enterprise and Innovation Mary Mitchell O’Connor, said: “Advanced research on Renewable Energy is a very worthwhile project and this work will contribute many benefits, including a long term legacy for the future.”