A new “blueprint” looks at how the UK – and the Midlands in particular – can take advantage of its industry, facilities and expertise in energy to become a “global leader”.

A new report published by the Energy Research Accelerator (ERA) and the Birmingham Energy Institute at the University of Birmingham sets out a “blueprint for how the UK can lead the world in managing its waste and converting it into clean energy”.

The Energy from Waste and the Circular Economy Policy Commission looks at the ways in which the UK and the Midlands in particular can take advantage of its industry, facilities and expertise in energy to become a global leader in this area.

Chaired by Lord Robin Teverson, the commission consists of leaders from industry, academia and the public sector, who, over a period of several months discussed the issues and challenges, explored the potential technological solutions and took evidence from a range of experts.

Waste disposal is a vital public service, but how that waste is disposed of is a significant challenge not just in the UK, but around the world. Putting waste into landfill, or incinerating it causes huge amounts of greenhouse gases and wastes what could be used a valuable resource, not just for recycling but also for energy.

There are already great examples of where this is happening, such as the Tyseley Energy Park in Birmingham, where a relatively small investment from government via ERA, and also the University of Birmingham, has provided the catalyst for a major energy from waste innovation zone to be created

On average, every kilogramme of products consumed in the UK takes 10kg of material to produce, of which 9kg is discarded as waste, and there is also rising public concern about plastic waste in rivers and seas.

Many countries in the Far East have banned unwanted shipments of waste from developed countries and European countries are also imposing tariffs to deal with imported waste. As such it is increasingly clear that the UK needs to find a solution to managing our waste at home. The ‘circular economy’ is certainly one solution, with much higher levels of recycling, to both conserve resources and cut CO2 emissions.

Not all waste can be recycled, the ERA says. It says “around half will always be residual waste”, but it says this also provides an opportunity. The Energy from Waste (EfW) Policy Commission believes that the EfW industry can become zero-emission and resource-efficient by 2050.

The EfW policy commission proposes three major areas where it believes that government investment would be highly beneficial: 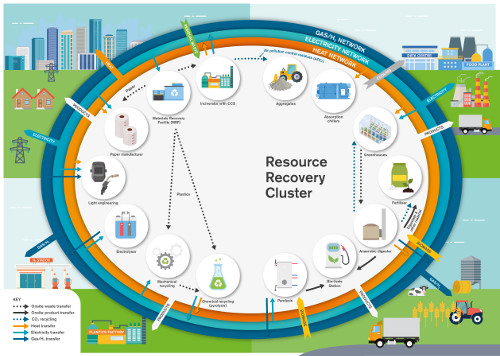 The Resource Recovery Clusters (RRC) will be developed on post-industrial sites, which could produce significant environmental, economic and regeneration benefits. The RRCs combine a spread of EfW and recycling technologies with businesses that can consume their cheap electricity, heat, fuels, CO2 and material outputs.

The National Centre for the Circular Economy would analyse material flows throughout the economy down to regional and local levels and develop deep expertise in recycling and EfW technologies. The CCE would also provide expert guidance and support for local authorities as they develop local or regional strategies and planning frameworks.

The R&D Grand Challenge aims to make big advances in small-scale carbon capture technologies in order to turn 100% of CO2 produced through the process of converting waste to energy into useful products. This is very important for areas such as the Midlands which are remoted from depleted oil and gas reservoirs.

Speaking about the Energy from Waste and the Circular Economy report, Lord Robin Teverson, the Chair of the EFW Policy Commission, said: “The management of waste is a huge issue not just in the UK, but globally.

“With the academic and industrial expertise that we have in energy and waste processing this country, we believe that with carefully targeted investment into the three areas we have identified, the UK would be perfectly positioned to be a global leader in this field, both industrially and academically. This will help to create many new businesses and jobs at old industrial sites both in the Midlands and across the country.”

Professor Martin Freer, Director of the Energy Research Accelerator and Birmingham Energy Institute, added: “We need to start thinking of the management of waste not as a huge problem but as a huge opportunity. There are already great examples of where this is happening, such as the Tyseley Energy Park in Birmingham, where a relatively small investment from government via ERA, and also the University of Birmingham, has provided the catalyst for a major energy from waste innovation zone to be created. In the East Midlands, we believe that the redevelopment of the Ratcliffe on Soar power station provides a fantastic opportunity for a large Resource Recovery Cluster to be created.

“Through ERA we have a partnership of over 1000 energy researchers and academics, and a network of industrial partners. We are ready and able to support the government in ensuring that the UK leads the world in energy from waste and circular economy.”