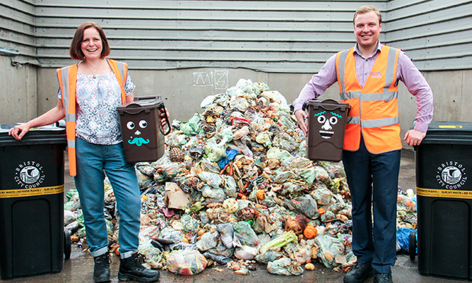 Figures released from Bristol Waste Company show that their ‘Slim My Waste – Feed My Face’ campaign made a significant positive impact on food waste recycling across the city.

290.5 tonnes of additional food waste has been collected over the 10 weeks since the project rolled out across the city in June this year. That is equivalent to the weight of one and a half blue whales, or nearly 60 fully grown African elephants.

The on-going, playful, campaign encourages residents to recycle their food waste rather than binning it and reduce the amount of food going to waste in the first place. The results show that the campaign is really changing residents’ behaviours with a 16% increase in the amount of food waste collected in the month following its launch.

In Bristol, food waste is sent just up the road to a processor in Avonmouth, which turns it into gas and electricity to power Bristol, and fertiliser to grow crops. It’s also cheaper to process food waste this way – saving the city even more money.

“It’s fantastic to see this campaign really changing attitudes and behaviours across this city and the wonderful impact it is having; saving money, creating energy and helping the planet too. I am incredibly proud that we are helping take Bristol one step closer to becoming a zero waste city and keeping it a clean, green, resourceful place to live.”

Not only that, it’s greener too. As food waste degrades faster than other materials in landfill, and releases a high amount of methane, the extra 290.5 tonnes of food waste diverted is equal to 174.3 tonnes CO2e savings, or taking 55 cars off the road for a year. The extra biomethane produced each week as a result of the campaign is enough to power an addition 3.5 households for a year with green energy, or 180 homes with the amount produced in a year.

Gwen Frost, Development & Sustainability Manager at Bristol Waste said: “When Bristol Waste discovered that the average Bristol black wheelie bin was nearly a quarter filled with food, with households wasting an average of £60 of food a month, we knew we had to do something about it.

“It’s fantastic to see this campaign really changing attitudes and behaviours across this city and the wonderful impact it is having; saving money, creating energy and helping the planet too. I am incredibly proud that we are helping take Bristol one step closer to becoming a zero waste city and keeping it a clean, green, resourceful place to live.”

Councillor Kye Dudd, Cabinet Member with responsibility for Waste and Recycling, said: “I am really pleased that, following a successful pilot, this campaign has captured the imagination of the city and helped us to increase our recycling rates.

“I would like to thank all residents who have engaged with the campaign, and I hope this project will continue to be a success and help us reach our ambitious recycling targets over the coming years.

“Slim My Waist – Feed my Face has also been recognised by the wider waste industry, which shows that Bristol is coming up with innovative ideas to try and increase the levels of recycling in the city.”

Bristol Waste is predicting that the ‘Slim My Waste – Feed My Face’ campaign will continue to benefit Bristol environmentally as well as financially for years to come. In the next year it is predicted to save the city tens of thousands of pounds and will continue to reduce harmful greenhouse gasses that contribute to global warming, equivalent to taking 250 cars off the road for a year. The biogas created has the potential to power an extra 180 households for a whole year.