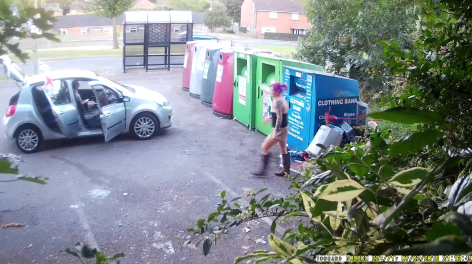 Cherwell District Council is introducing CCTV cameras to catch the people who fly-tip in the district and will be cracking down on those who commit this offence, it says.

An investigation has been launched as council officers installed a camera at a fly-tipping hotspot in Banbury.

Cherwell District Council’s environmental enforcement team are keen to speak to this person, who may be able to assist them with their enquiries regarding waste which was dumped illegally on 9 Aug at 9.21am.

Anyone who contacts the environmental enforcement team on 01295 227007 with information, has the assurance that their details will be kept strictly confidential.

“We would remind residents to only use licensed waste collectors i.e. those on the Environment Agency’s register of waste carriers, brokers and dealers and to ensure they have a valid waste carrier licence.”

Cllr Debbie Pickford, for clean and green, said: “Fly-tipping is an unacceptable blight on the neighbourhood and the community and costs the council approximately £40,000 per year.

“We would remind residents to only use licensed waste collectors i.e. those on the Environment Agency’s register of waste carriers, brokers and dealers and to ensure they have a valid waste carrier licence.

“With licensed collectors, waste and recycling centres, and Cherwell District Council’s bulky waste collection service all available, it makes much more sense for anyone with waste to get rid it by going down the legal route.”

According to the National Fly-Tipping Prevention Group, financial gain or saving is the main motivation for fly-tipping.

However, illegal waste disposal in a public place is an offence punishable by a fine of up to £50,000, or 12 months imprisonment if convicted in a magistrates’ court.

The offence can attract an unlimited fine and up to five years’ imprisonment for perpetrators convicted in a crown court.