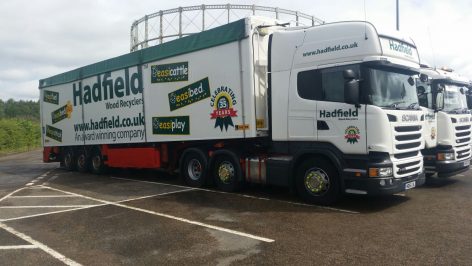 Hadfield Wood Recyclers is expanding its in-house fleet of vehicles with the addition of a new blower trailer, two new Scania “NextGen S450” cabs and two new drivers.
The company has also invested heavily in an extensive overhaul of its existing trailers, installing new walking floors, new engines, and upgrading the paintwork.

Matthew Howarth, Logistics and Chip Sales Manager at Hadfield Wood Recyclers, said it is a very exciting time for the company.

“We now handle all of our poultry deliveries in house, as well as some biomass deliveries, so these additions to our fleet and staff are a great step forward,” he said.

The company also has six general walking floor trailers which work mainly on biomass contracts but can also pick up bulk loads of waste wood.

Join Hadfield Wood Recyclers for a glass of fizz at 3pm everyday next week at RWM (12th-14th Sept). They will be exhibiting on stand 4F70-G71. 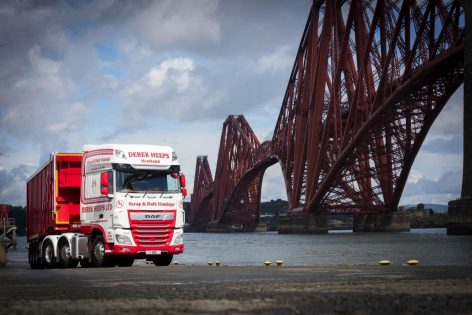 In just four months since receiving its global launch at the CV Show in Birmingham, DAF Trucks’ New CF and XF models are being handed over to UK customers in ever-increasing numbers, it says.

DAF has now topped 1450 units, as deliveries to UK operators start to ramp-up.

DAF Trucks has also announced details of its New LF lightweight range – including a new PACCAR 3.8-litre engine – thus completing the product line-up in 2017.
One of the first recipients of the New XF product was DAF operator Derek Heeps Ltd.in Bo’ness, West Lothian. The scrap metal transport specialist has taken delivery of a new, top-rated XF 530 FTG with Super Space Cab. The 6×2 mid-lift tractor unit comes with a three-year DAF MultiSupport R&M contract through DAF Dealer Imperial Commercials in Cumbernauld. Heeps was also the UK’s first recipient of a Euro-6 DAF XF in 2013.

“We really like the DAF product,” said Derek Heeps, “and this latest XF looks to be an improvement on an already excellent truck. We keep buying DAFs because they’re a good, solid, reliable vehicle – we have over 20 in the fleet now.”

Also announced recently, 35 new DAF demonstrators are now in the hands of the DAF Dealer network and are being trialled by operators. The demonstrators are part of a much larger European fleet of over 200 new CF and XF demonstrators, painted in metallic Jamaica Blue and sporting their distinctive demonstrator livery, manufactured at DAF’s two European production plants in Eindhoven and Leyland. 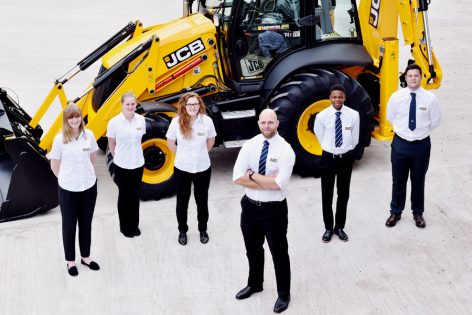 JCB has announced the recruitment of almost 170 apprentices and graduates as the company steps up investment in its “Young Talent” programme to record levels.

This year, the Staffordshire-based company is ploughing £7.5m into recruiting young people into the business to help meet future growth – triple the amount invested in the scheme when it started four years ago.

Of the 168 people who are joining JCB, a total of 117 are apprentices – the biggest ever single intake of apprentices in the 71-year history of JCB. A number will be “Higher Apprentices” who will go on to take degrees, learning while they earn and avoiding the need to incur costly student loans. The apprentices started work this week.

It brings to £20m the amount the company has invested in its Young Talent programme over the past four years – an initiative which has seen around 550 graduates and engineers join the business.

The news comes as JCB prepares to open applications for its 2018 programme on Monday, October 2.