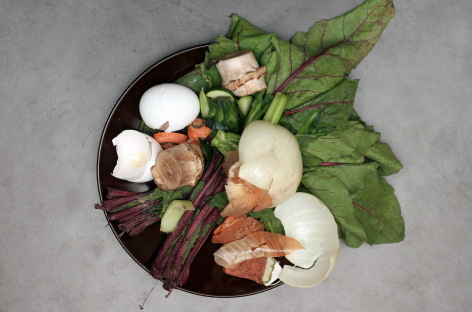 The report is published as eight charities and not-for-profit groups are set to receive grants from the Government’s £500,000 Food Waste Reduction Fund, administered by WRAP, to provide essential resources needed to expand their important work.

The eight organisations were chosen from 119 expressions of interest to the Fund and range from small to larger sized multi-site operations, located across England from Devon to County Durham. Individual grants range from £40,000 to £75,000, which together will help the eight redistribute an additional 2,500 tonnes of quality food to feed people in need – the equivalent of around six million meals.

Environment Minister Thérèse Coffey – “We’ve made good progress in tackling this problem, showing what can be achieved when the government and retailers work together. But there is more to do and this fund will help us waste less food and ensure more people in need get good quality meals.”

“We’ve made good progress in tackling this problem, showing what can be achieved when the government and retailers work together. But there is more to do and this fund will help us waste less food and ensure more people in need get good quality meals.” 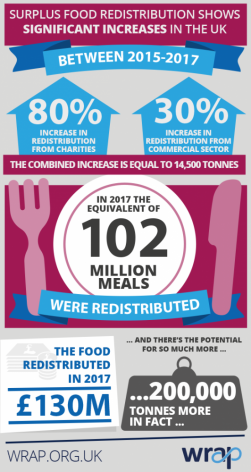 Retail is the largest supplier to the charitable redistribution sector, supplying 50-60% of the total surplus food, with the manufacturing sector supplying 30-40%. The remainder comes from the hospitality and food service sector, and other sources such as logistics and wholesale.

As part of this announcement, WRAP has amended the 2015 baseline for UK redistribution. The 2015 estimate for redistribution has reduced substantially from 47,000 tonnes (published in 2016) to around 28,500 tonnes. This is due to both improvements to the research methodology, and to more robust and granular data from redistribution organisations.

Peter Maddox, Director WRAP said “It’s great to see such a rapid rise in redistribution and the growing number of partnerships between the supply chain and charities. This stops good food going to waste, and helps feed people. But we know there’s much more to do. Our research shows food redistributed, from manufacturers and retailers, could increase further, by more than 200,000 tonnes.

“There’s potential too to source greater amounts of surplus food from other parts of the supply chain like primary production, and the hospitality and food service sector. Our Courtauld 2025 Redistribution Working Group is helping to forge new links and supports both businesses and redistribution organisations in ensuring surplus food feeds people, first. Businesses signatories have committed to doubling the amount they redistribute by 2020. Seeing these numbers, I am confident they will hit that target.”

Subject to contract, the eight charities and not-for-profit groups receiving grants will demonstrate what can be achieved (encouraging others to follow suit) with the Working Group sharing best practice.