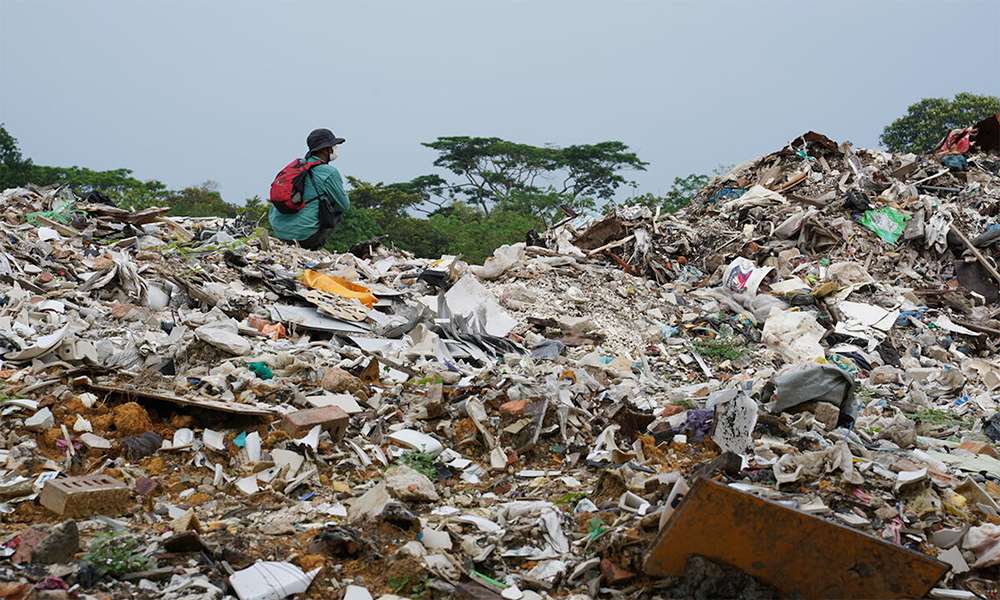 Greenpeace has called for an investigation into the plastic waste industry, following the findings of its latest The Recycling Myth 2.0 report.

It says the investigation should look at the plastic waste industry with a focus on possible corrupt, fraudulent and illegal practices by exporting countries and local unlicensed operators.

Greenpeace says that plastic waste exports from the UK and other developed nations, “illegally dumped in Malaysia”, have caused widespread environmental contamination.

Despite commitments by the UK government to curb the trade in plastic waste exports, Britain is still continuing to behave like a long-range fly-tipper

It says heavy metals and toxic chemicals potentially harmful to human health, were found to be present in soil, and water samples taken from illegal dump sites where plastic waste from the UK – some of it from household recycling collections – had been discovered in a previous investigation by Greenpeace in 2018.

The samples were taken from four sites in Selangor and Kedah states, which had since been closed down and partially cleared.

The Greenpeace report highlights the long-term effects of what it calls a “corrupt and broken recycling system”, where exports of contaminated waste are often dumped illegally in developing countries, it says.

“Despite commitments by the UK government to curb the trade in plastic waste exports, Britain is still continuing to behave like a long-range fly-tipper,” said Louise Edge, plastics campaigner at Greenpeace.

“This report exposes how we are inflicting a poisonous and toxic legacy on innocent communities living on the other side of the world.

“We need to stop ‘offshoring’ the country’s plastic waste problem and focus on reducing and reusing packaging – supporting UK industry to recycle what is left over.”

After China banned plastic waste imports in January 2018, Malaysia became a primary destination for plastic waste originating from countries including the UK, the United States, Japan, Germany, Hong Kong, Australia and Italy among others.

Despite the Malaysian government’s shutdown of 218 plastic recycling factories between 2019 and 2020 for not complying with regulations, the UK continues to export plastic waste to Malaysia, Greenpeace says.

Between Jan-March 2020, UK exported 13,977 tonnes of plastic waste to Malaysia – up from the same period last year when the UK exported 10,023 tonnes (source: www.uktradeinfo.com)

“The illegal dumping of plastic waste from over 19 countries worldwide has left an indelible mark on Malaysia and other countries in Southeast Asia”, said Heng Kiah Chun, Greenpeace Malaysia Campaigner.

“Aside from the ongoing Covid-19 pandemic, communities in Selangor and Kedah have another invisible enemy to face – chemical contaminants that remain in our environment with the possibility of entering our food chain.”

Samples of material resembling topsoil covering large areas of the ground at sites where plastic waste had been burned, were found to be composed of shredded plastic not earth.

Testing showed that these contained brominated flame retardants and high concentrations of heavy metals such as cadmium and lead, which can accumulate in the body of exposed communities and organisms over time.

Lead can cause damage to the nervous system and development in children over long-term exposure, whereas cadmium can result in damage to the kidneys and bones.

Water sampling of surface waters from nearby riverbanks and canals contained chemical contaminants such as phosphorus-based flame retardant (TPPO) as well as metals and metalloids such as antimony, nickel and copper.

“When plastics are exported from one country to another they can bring with them a wide range of hazardous chemicals,” explained Dr Kevin Brigden, senior scientist form Greenpeace Research Laboratories.

Adding that, “Improper storage and treatment can later release these chemicals into the local environment, and burning can even generate new hazardous chemicals.”

Investigations were carried out collaboratively among Greenpeace offices both locally and internationally. These include Greenpeace teams from Malaysia, Germany, Hong Kong, and Italy as well as Greenpeace Research Laboratories in the United Kingdom.

It also recommends Extended Producer Responsibility (EPR) be enforced in the production of plastics by regulating corporations that produce unnecessary single-use packaging for products, requiring them to track products from cradle to grave and conduct due diligence prior to the exportation of plastic waste in order to ensure and strengthen the transparency of plastic usage, disposal and recycling systems globally

A global agreement should also be promoted to combat the flood of plastic among governments from plastic waste exporting countries to immediately work towards a binding international agreement to resolve the plastic waste problem, covering all aspects of the single-use plastic lifecycle while furthering efforts in the protection of the climate, oceans and biodiversity.

The Recycling Myth 2.0 report can be downloaded here.