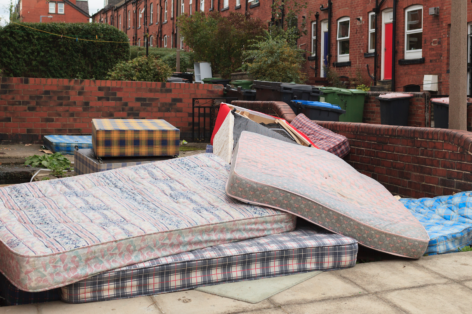 Householders face new financial penalties of up to £400 in cases of fly-tipping where they have failed to properly exercise their duty of care, Defra has announced.

Householders have a legal “duty of care” to ensure they only give their waste to a licensed carrier. New financial penalties of up to £400 for householders who fail to properly exercise this responsibility, and whose waste is found fly-tipped, have moved a step closer as legislation is laid in Parliament.

Potential fly-tipping by rogue operators, and the risk of a penalty, can be simply avoided by using certified waste carriers, which can be checked easily by visiting the Environment Agency’s website, where you can enter the business name or registration number to immediately confirm their status as an approved company.

The government has also issued guidance to ensure councils use these new powers proportionately and make clear fines should not be used as a means of raising revenue. To strike the right balance householders should not be fined for minor breaches, and the guidance also stresses that consideration should be given if the individual is a vulnerable person due to age related ill-health or a mental or physical disability.

The new penalties, which are expected to come into force early next year, will make it easier for councils to tackle fly-tipping and provide an alternative to putting cases through the courts which can be a lengthy and costly process, according to Defra.

In 2016-17 clearing up fly-tipping incidents cost councils in England £57.7 million, with around two thirds of all fly-tipped waste containing household waste.

Environment minister Thérèse Coffey – “We must all take responsibility and make sure our waste does not end up in the hands of criminals who will wilfully dump it and these new powers will help us to crack down on rogue waste carriers.”

Latest figures show our tough actions to crack down on fly-tippers are delivering results, with no increase in the number of incidents for the first time in five years.

Environment minister Thérèse Coffey said: “Fly-tipping is an unacceptable blight on our landscapes. Many people do not realise they have a legal duty to look up waste carriers and we want councils to step up and inform their residents.

“We must all take responsibility and make sure our waste does not end up in the hands of criminals who will wilfully dump it and these new powers will help us to crack down on rogue waste carriers.”

To tackle the potential “over-zealous” enforcement on households, in 2015 the Government removed criminal penalties for breaches of household bin requirements in favour of a new civil penalty system.

Councils were urged to use letters or notices on bins to remind households of appropriate practices, and this measured and balanced approach, set out in further guidance produced earlier this year, continues to allow councils to focus their efforts on the small minority who cause genuine harm to the local environment through irresponsible behaviour.

Today’s move comes as the government publishes the response to its consultation on tackling poor performance in the waste sector more widely. New measures include a requirement for all waste facilities to have a written management plan to minimise the risks of pollution to the environment, and making it harder for applicants with relevant past offences to obtain a permit to operate a waste facility.

Recommendations from the review will be considered as part of the forthcoming Resources and Waste Strategy where we will set out our approach to tackling all forms of waste crime.

The Environmental Services Association (ESA), welcomed the Government’s response, but said it would like to see “more detail” and more progress in a number of key areas.

“… Without a complete overhaul of the carriers, brokers, dealers regime – as previously recommended by ESA and others, including the Government’s own review into Serous and Organised waste Crime – we retain our concerns about the effectiveness of this proposal to deter the ‘real’ criminals.”

ESA’s head of regulation, Sam Corp said: “Whilst we would have liked to have seen more detail on some key areas, such as reform to the carriers, brokers, dealers and exemptions regimes, perhaps it is not surprising that this detail has yet to emerge at a time when Brexit related matters seem to be demanding so much of Civil servants’ time”.

“The proposal to introduce fixed penalty notices to householders who have failed in their duty of care, is a significant measure which should have a real impact by raising awareness of this important responsibility amongst householders. However, without a complete overhaul of the carriers, brokers, dealers regime – as previously recommended by ESA and others, including the Government’s own review into Serous and Organised waste Crime – we retain our concerns about the effectiveness of this proposal to deter the ‘real’ criminals.

“Current requirements for becoming a registered waste carrier, broker or dealer are just not stringent enough. So, unfortunately, simply checking that you have passed your waste to a registered carrier does not provide any real guarantee that it will not then be flytipped. We therefore look forward to further Government action in the near future to tackle this issue”.

“However, any new requirements need to be adequately policed and enforced and must be underpinned by appropriate sanctions moving forward.”

“The clarification of the legal requirement for technical competence is essential and we consider the development and introduction of a system for registering/de-registering TCMs for persistent non-compliance or when convicted of relevant environmental crimes as the right course of action,” adds WAMITAB chief executive Chris James.

“It is the fulfilment of a need identified and discussed by WAMITAB, CIWM and the Environment Agency and Natural Resources Wales on a number of occasions. However, as always, the devil will be in the detailed implementation.”