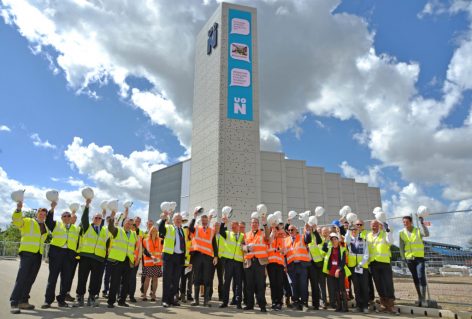 Northampton has had a recent addition to its skyline in the shape of a 26-metre flue shaft, complete with LED screen, which is part of the University of Northampton’s new energy centre located on its Waterside Campus.

The University has worked closely with sustainable energy specialists, Vital Energi to construct the energy centre and marked the completion in a special ceremony on 1 August where the screen was officially switched on by Professor Nick Petford, Vice Chancellor of the University of Northampton.

The energy centre has been designed to produce less emissions that traditional systems and will save over 1,000 tons of CO2 in the short term by using woodchip biomass and gas to provide hot water and low carbon heating to buildings around the campus.

This will rise to 2,200 tons annually once the Combined Heat and Power Engine is added to the centre. This is the equivalent of taking 431 cars off the road each year.

“Creating a renewable energy solution for a new town centre campus is an ambitious objective, however the University has achieved this whilst demonstrating their commitment to sustainability”

The flue shaft is approximately the height of three London buses and its unique 12 metre-high LED screen, fitted by screen experts digiLED, will be showcasing the University at the gateway to the town on the Bedford Road.

Bob Griggs, Project Director at the University of Northampton said, “We are delighted to have the opportunity to develop the University’s commitment to its sustainability agenda and environmental infrastructure has been a key factor in the planning and construction of the Waterside Campus. By working with Vital Energi we have a sustainable, future proof heating network which will service the campus well.”

Mike Cooke, Regional Director at Vital Energi, commented: “Creating a renewable energy solution for a new town centre campus is an ambitious objective, however the University has achieved this whilst demonstrating their commitment to sustainability. From the energy centre’s unique architecture and cladding through to the LED screen of the flue shaft, the scheme creates a great example for the industry.”

The University’s Waterside Campus is currently being built on a former 58-acre brownfield site on the banks of the River Nene close to Northampton town centre. Work started in July 2015, and the campus will open in September 2018 ready for the new academic year.