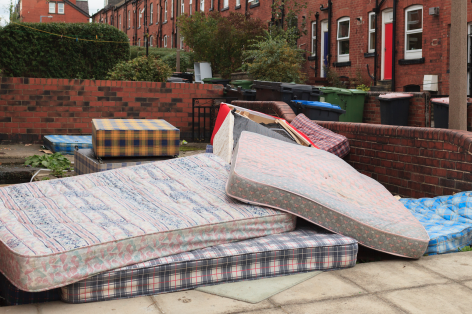 Lack of awareness of what fly-tipping has led one in five Londoners to fly-tip in the past two years, a new report from the London Borough Environment Directors Network (LEDNet) and Keep Britain Tidy reveals.

The new report includes the findings of an online YouGov survey of 1,000 Londoners, who were asked a range of questions about their fly-tipping knowledge and behaviour.

Black bin bags of rubbish left next to bins is the most common form of fly-tipping – yet more than two thirds of survey respondents (69 per cent) – were unable to correctly identify this as fly-tipping.

One in five Londoners who participated in the poll admitted to fly-tipping their waste and only 1 per cent of respondents correctly identified all examples of fly-tipping that they were presented with during the survey.

In London fly-tipping has increased at twice the rate observed nationally, rising by 14 per cent from 2015/16 to over 366,000 reported incidents in 2016/17. London boroughs spend £18 million each year dealing with fly-tipping.

Fly-tipping behaviour also appears to decrease with age, according to the survey, with 30 per cent of 18-24 year old respondents saying they had fly-tipped compared to 13 per cent of those aged 55 and over.

Overall, respondents from in the AB and C1 groups were significantly more likely to fly-tip black bags and cardboard waste, making up 53 per cent of those who admitted to doing it in the survey.

These behavioural insights and proposed solutions gathered as part of LEDNet and Keep Britain Tidy’s research will now be used to design pilots that trial innovative approaches to tackle fly-tipping.

Keith Townsend, Chair of LEDNet and Executive Director of Environment and Customer Services at LB Ealing, said: “Londoners want to live in a cleaner, greener city and ensuring everyone disposes of their waste properly is a vital part of that. Our new report has revealed the scale of fly-tipping in London and provided invaluable insight into why people do it.

Allison Ogden-Newton, Keep Britain Tidy Chief Executive,  – “This research will help us identify what we need to do to turn the tide on fly-tipping, to cut the costs to local authorities and create a better environment for everyone, on their doorstep.”

“We want to be proactive in implementing evidence-based solutions that really work for our communities, and London boroughs can now use the report’s findings to review their current strategies for tackling fly-tipping and trial new approaches to dealing with it.”

Allison Ogden-Newton, Keep Britain Tidy Chief Executive, said: “This country is in the grip of a fly-tipping epidemic, with the latest figures from local authorities showing they dealt with more than one million incidents in 2016/17, and some of the most heavily fly-tipped places are in our capital.

“This research will help us identify what we need to do to turn the tide on fly-tipping, to cut the costs to local authorities and create a better environment for everyone, on their doorstep.”

Cllr Julian Bell, Chair of London Councils’ Transport and Environment Committee, said: “London boroughs are keen to play their part in supporting residents and businesses to minimise their waste and reduce fly-tipping. If we work together we can improve London’s environment for the benefit of everyone.

“LEDNet and Keep Britain Tidy’s report has shed new light on the causes of fly-tipping, which will help boroughs and our partners redouble efforts to tackle it.

“We know our communities would rather we invest in important council services than cleaning up illegally dumped waste.”

In order to drive improvements in tackling household fly-tipping in London, the research by LEDNet and Keep Britain Tidy makes the following recommendations to local authorities and other organisations or campaigns involved in waste disposal: