Are the cracks beginning to show at the UK’s household waste recycling centres, asks Resource Futures’ Eric Bridgwater. Recent statistics have shown a drop in recycling rates, but are there ways to stop the “slump”? 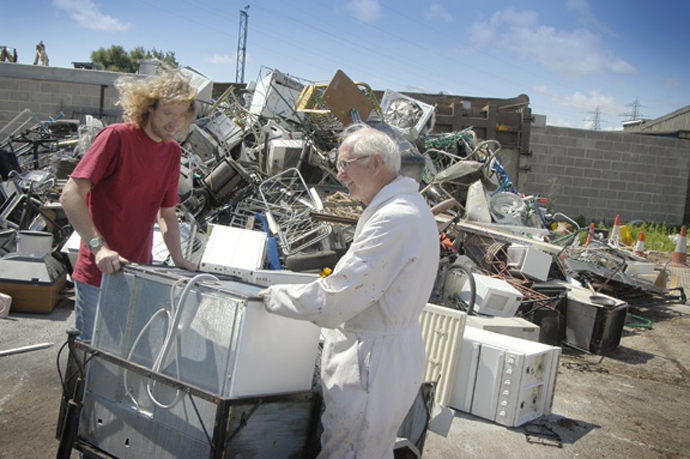 Last summer, Resource Futures reported that for the first time – since reliable data on household waste recycling centre (HWRC) performance has been available – overall HWRC recycling rates in England were beginning to slow down. At that point, it was too early to say whether the stats signified the start of a period of stagnation for recycling at England’s HWRCs, or if it was just a bit of a “blip”. However, our latest review has revealed further falls in England and Scotland, whilst Wales and Northern Ireland have seen an increase. So what’s going on at our HWRCs?

The important measure is the recycling rate, excluding soil/rubble (as including it can give a distorted view of the general recycling efficiency of a site), and in England between 2011/12 and 2012/13 HWRC recycling rates dropped from 63 to 61.3 percent, which is worrying. In Scotland the drop was 1.3 percent; whilst in the same period the rate in Wales increased by 2.5 percent and in Northern Ireland by 0.5 percent.

Overall HWRC tonnage throughputs have decreased at around five percent per year since 2007/08 and are likely to be related to improvements in eliminating trade waste abuse, as well as the recent economic recession.

There could be a number of reasons for the recent reduction in recycling rates, such as the availability of alternative viable outlets for the various materials collected at HWRCs, including improvements to kerbside services. Other contributing factors could be light-weighting of packaging and other items (flat screen rather than CRT televisions, for example); the weather impacting on the amount of garden waste produced; and the economic downturn, all meaning we are throwing away more non-re-usable and non-recyclable items than in the past. However, all this remains largely speculative until reliable research is carried out. 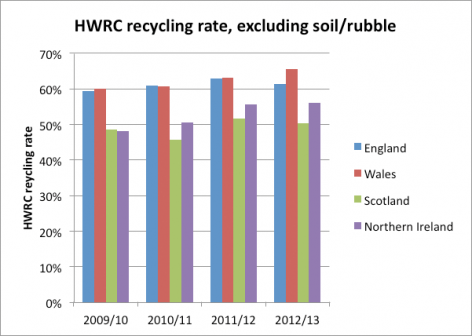 Whatever the facts behind the figures, the important point is that it should be possible for local authorities and contractors to ensure that the slump in national HWRC performance is short-lived. From our experience, we are convinced that the best way to achieve this is to conduct site visits to review the layout and facilities and how they are managed, and to propose practical, viable measures for improving site performance.

A good starting point for local authorities seeking to improve HWRC recycling rates is WRAP’s online guidance, which includes a performance assessment checklist and toolkit to work through the various options for improving HWRCs.

Written by Resource Futures in 2013, the guidance is aimed at helping local authorities and contractors to identify actions to “perk up” performance across all aspects of site management including operations and infrastructure, staffing, legislation, contracts, public behaviour and costs, and we will be examining three of these – re-use, commercial waste and new materials – in more detail with a series of exclusive online articles on www.ciwm-journal.co.uk over the next few weeks.

For the next in Resource Futures’ series on HWRCs, click here

Eric Bridgwater is a principal consultant at Resource Futures. His skills include understanding national waste data and factors influencing the performance of collection systems. He has managed the delivery of kerbside options appraisals for a wide range of local authorities.