The Food Waste Reduction Bill looks to be dead in the water, and is stalling the development of sustainable food waste practices, says Ashfords LLP’s Jade Carter. Despite increased media exposure of the problem, the industry is not being given the tools it needs to improve the situation

Kerry McCarthy, the MP sponsoring the Food Waste Reduction Bill (the “Bill”) has nominated Friday 13 May 2016 for the Second Reading debate on the Bill. As the House is not expected to sit on this date, the second reading has again been delayed in what has become a succession of setbacks since the 26th January 2016. The fate of the Bill is somewhat doomed with it likely to fall at the end of this Parliamentary session. The Bill was an attempt to reduce the food that is wasted through industry supply chains and would require supermarkets to donate unsold food, publish the amount of food waste produced, and comply with targets.

The failure by the Government to support the Bill is a second blow following the removal of national targets from the European Commission’s circular economy package. It is disappointing that England has not been provided with the legislative tools it needs to drive the war on food waste.

Whilst the failure of the Bill is disheartening as it is again stalling the development of sustainable food waste practices, the philosophy of viewing food as a resource is prominent throughout the industry and one which is gaining greater attention. TV programmes such as celebrity chef’s Hugh Fearnley-Whittingstall’s, Hugh’s War on Waste is focusing the public eye on the waste produced with people using social media to find out more. 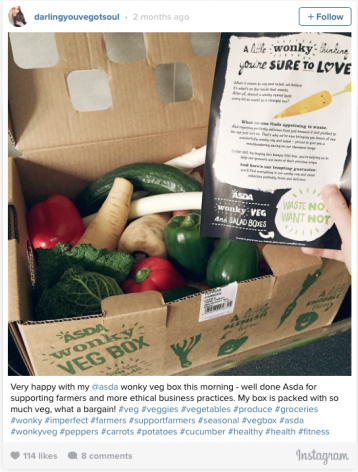 The industry has been forced to respond by launching high profile projects such as Asda’s wonky veg boxes (pictured), M&S’s redistribution scheme and Sainsbury’s ban on buy one get one free offers. The British Retail Consortium (BRC) report last year showed promising reductions of 20,000 tonnes of food waste over a year by the leading retailers, highlighting progress has been made in a bottom up approach.

The uncertainty of the future of the sustainable treatment of food is of further concern for funders and developers of anaerobic digestion plants. Food waste is the largest non-liquid feedstock to many anaerobic digestion plants with 1.6m tonnes of food waste being recycled by the sector (WRAP undertakes a comprehensive survey of the industry – www.wrap.org.uk/content/ad-sees-significant-growth-says-latest-sector-survey). This industry heavily relies on cleaner, segregated food waste produced by commercial organisations and whilst the Bill aims to treat commercial food waste more sustainably we cannot ignore the fact that it will reduce a major feedstock for the industry. If the Bill falls, any revived policy will need to fill this void by developing domestic food waste collections.

Currently less than half of households in England have access to a food waste collection which, if supported, could provide a buffer by supplying an alternative feedstock. Without this expansion developers of AD-plants who often face long lead in times, are likely to be disheartened by the threat of the removal of a key feedstock without the support of an alternative source.

Jade Carter is a Trainee Solicitor at Ashfords LLP writing on behalf of the Energy and Waste Team, headed up by Partner Ruth Murray. If you have any Energy and Waste queries, please email Ruth: r.murrray@ashfords.co.uk