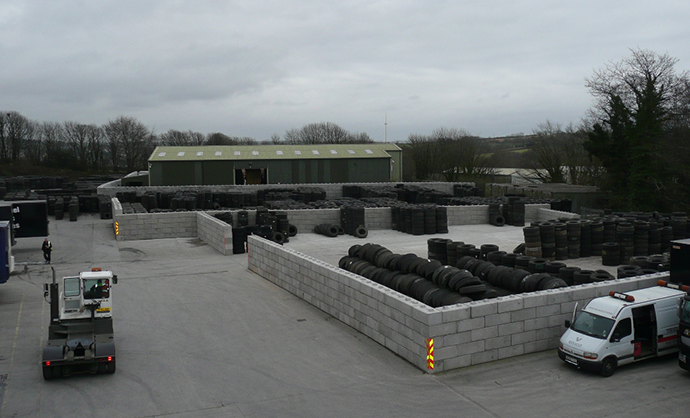 Current legislation and best practice is based on Pollution Protection Guidance (PPG29), which recommends using a combination of maximum stack sizes and minimum separation distances between stacks of materials as the primary risk management strategy.

Written as a regulatory guide for the safe storage of combustible materials to prevent and control fire, PPG29’s aim is to provide companies with appropriate standards and to share best practice for the management of fire risk involving storage facilities.

Its focus is almost exclusively on the use of specified gaps and distances between bays of stacked materials, and indeed this one-size-fits-all approach is pretty much the only one offered by the guidelines, which fail to consider any supplementary or alternative approaches that could be used.

With the prevalence of waste management, treatment, and storage sites in city centre and urban locations, where space is at a premium, adherence to PPG29 can be prohibitively expensive and not necessarily the most effective solution.

I’ve seen time and again, high-quality, free-standing physical fire breaks both reduce the risk of fires spreading and allow businesses to make more efficient use of their sites by permitting larger material stacks and more effective use of yard space. And use of physical fire breaks is already being received positively by many in the insurance sector too, with both reductions in premiums, and continuation of cover when there was previously some doubt being reported.

The use of physical fire breaks will allow sites to better segregate their materials and to utilise space which would otherwise have had to be left clear. By using freestanding blocks as fire breaks, not only can the costs and inconvenience of permanent foundations be avoided, but the walls themselves can be easily dismantled and reassembled by unskilled personnel, which allows facilities to keep up with ever-changing recycling trends, storage needs, and business demands.

“An estimated 15,000 tonnes of tyres ignited in an incident which saw tens of dozens of firefighters attend to tackle, while representatives from the Environment Agency were also involved to help minimise the impact on air and water”

My case for the extension, re-writing, or superseding of the PPG29 guidelines has been further strengthened by the prevalence and ferocity of some recent fires breaking out at plants and sites across the country.

Many of these businesses followed the guidelines to the letter. They have provided the appropriate gaps between materials, have managed their stack heights, and did everything in their power to avoid a disaster. Yet they still suffered not only the devastating effects of a fire starting, but the even more disastrous results of the initial fire quickly spreading throughout the premises.

Take the recent fire breakout at a recycling plant in North Yorkshire, as an example. An estimated 15,000 tonnes of tyres ignited in an incident which saw tens of dozens of firefighters attend to tackle, while representatives from the Environment Agency were also involved to help minimise the impact on air and water.

Not only did the recycling facility itself suffer massive disruption, it caused havoc both for the local community and local businesses, and even some nearby flights were grounded due to the amount of smoke. This is one of many fires which have made the headlines recently and it clearly shows that we need to be more proactive and more advanced in the approach to fire risk management and disaster recovery.

Concrete has the lowest rate of temperature rise across a surface, unlike steel or timber, and cross-sections of concrete’s internal zones don’t reach the same high temperatures as a surface exposed to flames. Put simply, concrete does not add to a fire’s fuel load, and very few other materials can argue the same.

Precast interlocking concrete blocks also don’t emit any toxic gases or fumes, are resistant to smouldering materials, and – if properly designed and manufactured – can be described as ‘fire-proof’. We have British and European Standards to distinguish whether concrete blocks are fit-for-purpose and these very much focus on the ingredients of concrete, so you should only consider blocks which comprise of less than 1 percent organic constituents with no recycled materials as being Class 1A Fire Resistant based on clause 4.3.4.4 of EN 13369.

Doing nothing and maintaining our blinkered focus on the PPG29 guidelines at the exclusion of all other risk mitigation strategies is not an option for many in the sector, and certainly for those who have suffered issues in the past.

The time is right for new guidelines to be developed but until then, I urge waste and recycling businesses to consider the use of physical fire breaks as part of their armoury in the war against fire. Speak with your local fire safety officer, liaise with your industry bodies, and speak with your colleagues, competitors and the wider industry. We need to work together to evolve outdated guidance into something ready not only for 2014 but for the years to come” concluded Owen.