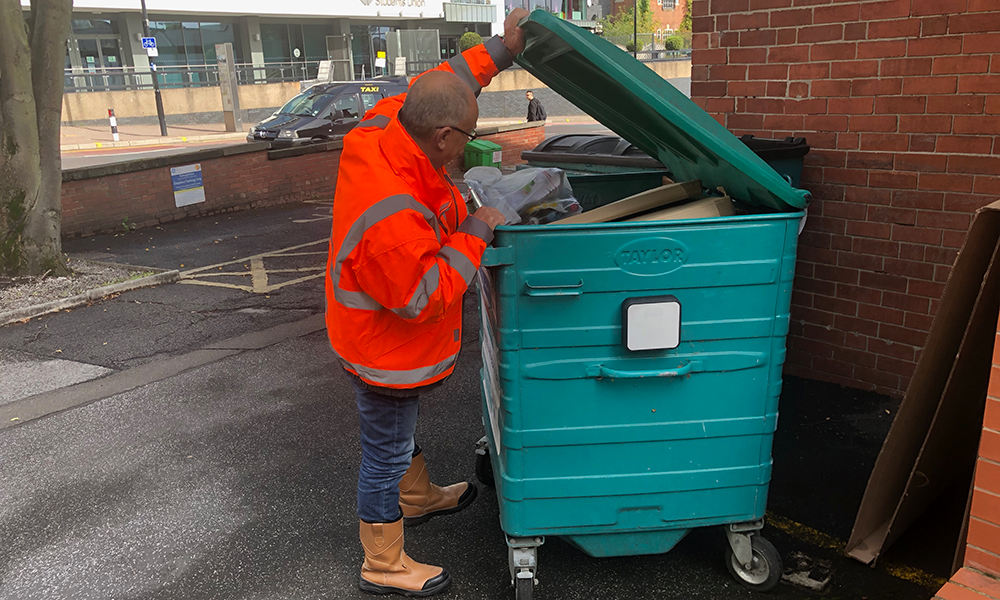 In the last decade, 20 people in the UK have lost their lives after deciding to take shelter in a bin. 50% of those who died had no home to go to and 50% never made it home after a night out.

On a daily basis, people across the UK are taking shelter in bins. During colder months, people use bins to shelter from the elements, however the shelter provided by a bin is not always about keeping dry and warm. Some people are hiding from street violence while others use it as a place to sleep because they missed the last bus home.

With winter setting in and homelessness on the rise, finding people in bins is an increasing issue and prevention is needed to avoid further near misses, injuries and death, as well as to reduce the stress and anxiety experienced by waste operatives.

During 2013, CIWM, WISH and Biffa carried out a survey to determine the number of instances of finding sleepers in waste containers. At the time, the worrying trend was the point that the person was discovered, with almost 40% being found after the loading operation had begun. In light of recent accidents, Biffa contacted CIWM and WISH to resurvey the resources and waste sector to find out whether an increase in homelessness has meant an increase in the number of incidents of homeless people sleeping in containers. The report will be available by the end of 2019.

So, what can be done to assist waste companies and their operatives to identify when a person is inside, or has been taking shelter in, a bin?

TWS has built the ‘Human Detector’, a solution designed to assist waste operatives in identifying whether someone is inside, or has been taking shelter, in a bin. The device works by measuring 4 physical factors – movement, gas, temperature and humidity – to determine if a person has entered a waste container. The detector fits onto the container and its very simple to use: a green light denotes that no one has been in the container since it was last lifted and a red light indicates that someone is inside or has been in the container.

Having this information means that, in addition to aiding operators to identify whether someone is in the bin, it also works to assist them in identifying areas of high risk.

From the operator’s perspective, the stress and worry of finding someone in a container is highly unpleasant. The person in the container could become confused or emotional if disturbed, so having a warning in place can help to prepare the operator. This also means that the operator now has an aide to avoid the distress to both the inhabitant of the container and the operator in the event of an incident

The Human Detector is a first of its kind and is currently being trialed in the field by two major national carriers and four regional carriers, in six city locations.

The Human Detector is not about taking away shelter as a bin is sometimes the only shelter that person may have but it’s about keeping them safe should they need to shelter in the bin.

The Human Detector has the option to connect via Bluetooth to a smart app on a tablet or phone or can be operated as a standalone unit. The device has the additional capability of a 30-day memory to record when and where people have been in bins. The manufacturer, TWS, with the permission of the carrier, would like access to this information so that it can be shared with homeless organisations to get help to those who need it most.

Some of the profits from each unit sold will be donated to small local homeless charities to provide food, aid and clothing to those in need.

How important are statistics to the waste industry