Opinion polls at the 2016 Resourcing the Future provided insight into the policy measures that delegates felt will be important in the future of the sector. CIWM has produced an infographic showing the results.

The voting, which took place at the end of each conference session, showed strong support in a number of areas, starting with a thumbs up for the circular economy. Asked if it was a real, economically viable and achievable concept at the end of the Opening Debate, nearly three quarters of the voting delegates said yes.

However, only 36% said they felt genuinely engaged in industry discussions about the EU Circular Economy (CE) package.

Delegates were more divided in their views on how to drive progress towards circular economy objectives but there were some areas of strong consensus. Echoing the growing emphasis in the EU CE package on the deployment of economic incentives by member states, 60% of voters identified tax incentives for resource efficiency as a priority policy mechanism – compared to just 6% who felt that targets would deliver rapid and effective change.

Extended Producer Responsibility (EPR) snapped up 33% of the vote but emerged as a much stronger contender later in the day when a resounding 93% supported the UK following the example of other EU member states in rolling out ERP schemes for more products, such as tyres, textiles and furniture.

Almost two thirds (65%) felt that direct charging at the point of sale for key products and materials would be helpful in engaging consumers in EPR, and over half identified Pay As You Throw and a review of Landfill Tax and landfill bans as important considerations to drive wider behaviour change.

Looking beyond economic incentives, 43% thought EU-wide secondary materials standards would deliver the most rapid and effective change in terms of improving demand for secondary raw materials, with 31% opting for stronger eco-design requirements and, surprisingly, only a quarter of voters going for green procurement.

Click the preview below to view the full infographic. 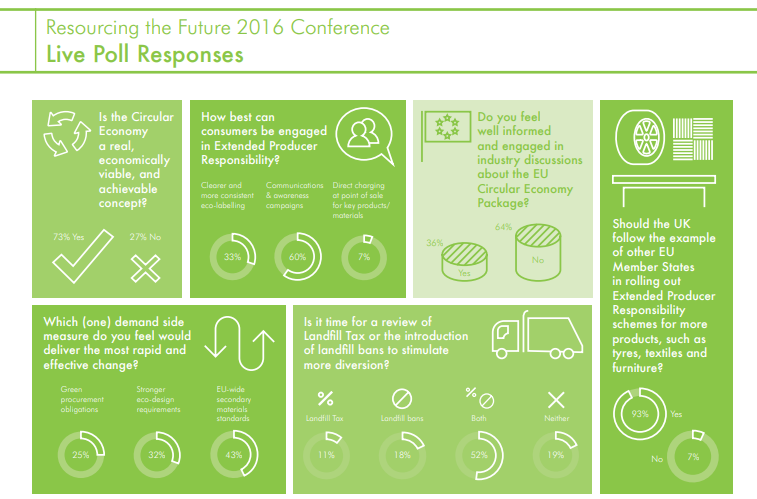 Fashion and used clothing – key facts about the UK market