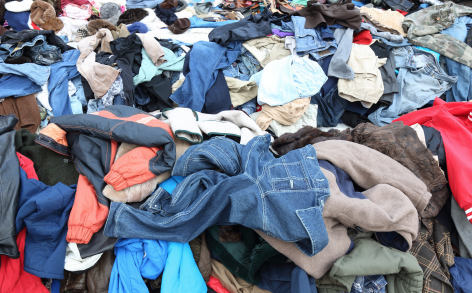 Almost a quarter (23%) of Londoners’ clothes are unworn, according to new research from UK clothes reuse charity, TRAID.

The study finds that Londoners own an average of 76 items of clothing, but 18 of these are lurking in wardrobes and never worn – most commonly because they no longer fit.

It would take the entire population of London 15 years to drink the water footprint of London’s unworn clothes.

Enabled by the rise in ‘fast fashion’, 16% of Londoners buy new clothes at least monthly, rising to 24% among those aged 18-24. They are split in awareness of the benefits of keeping these clothes in use for longer: 46% feel uninformed about the environmental benefits and 43% are unaware of the social benefits. 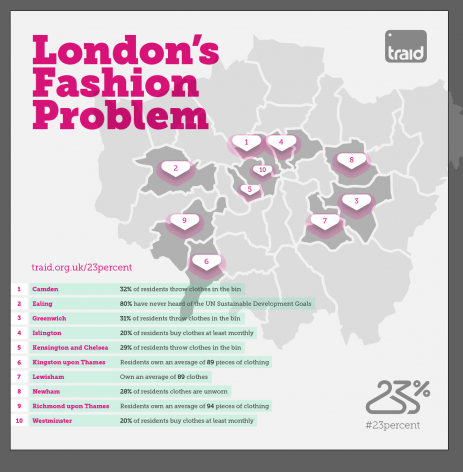 Mary Creagh MP, Chair of Parliament’s Environmental Audit Committee commented: “The way we design, make and discard clothes has a huge impact on the environment. TRAID’s 23% campaign calls on Londoners to put 123 million items of unworn clothes back into use. Initiatives like this one help everyone to recycle their clothes – and to understand why that matters – as well as supporting the UN Sustainable Goal Number 12.”

Shockingly, a quarter (22%) of Londoners throw clothes in the bin after a clear out, rather than passing them on. This is most common among those in Camden (33%), Greenwich (31%) and Ealing (30%).

Andrea Speranza, Campaign Manager at TRAID, commented: “London is one of the world’s greatest fashion capitals and its wardrobes are full of unworn clothes. Cheap fast fashion is powering rising consumption and production, placing unsustainable demands on finite resources to produce clothes which are poorly made, barely worn and quickly replaced. From carbon emissions and use of water in the production of clothes, through to landfill and incineration when clothes are thrown away, the fashion industry can have a devastating environmental impact.

“TRAID’s 23% campaign calls on Londoners to put 123 million items of unworn clothes back into use. Initiatives like this one help everyone to recycle their clothes – and to understand why that matters – as well as supporting the UN Sustainable Goal Number 12.”

“Giving longer life to our clothes by passing them on avoids the purchase of new items reducing the carbon, water and waste footprints of our clothes. Given the chance, Londoners care and are ready to take action – and we are here to help them.”

In 2015, the United Nations member states agreed to implement 17 Sustainable Development Goals (SDGs) to end poverty, protect the planet and ensure prosperity for people everywhere in the world by 2030. Consumers can play an important role in these global goals, and yet TRAID’s research found that 72% of Londoners have never heard of the SDGs.

When informed how passing on unworn clothes helps sustainable consumption and production (SDG12), 61% of people in London were positive about helping to meet this goal. Two fifths (41%) of Londoners said that they would be more likely to have a clear out after reading about the environmental benefits of doing so.

Speranza added: “Progress of the UN’s Sustainable Development Goals is vital to the future health and sustainability of our planet, but 72% of Londoners have never even heard of them. Creating wider awareness and empowering people to take action is critical.  The campaign to put London’s 23% of unworn clothes back into use is an opportunity to advance the goals, and ensure more sustainable consumption and production.”