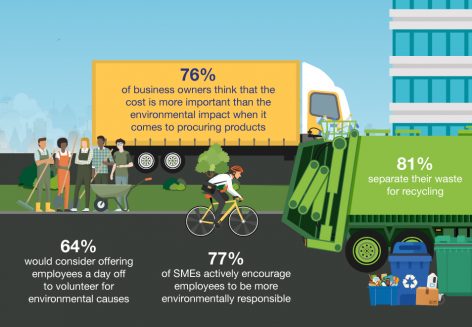 81% of SMEs in the UK separate their waste for recycling, according to a new survey. It also found the cost of goods is still more important than environmental impact when it comes to procuring products for 76% of business owners.

Recycling is a priority for 81% of firms, most notably in the engineering sector where recycling rates rises to 92%, the survey found.

The findings are based on Close Brothers Asset Finance’s quarterly survey of 900 businesses in UK and Ireland, which canvassed opinion across several industries on a range of issues affecting their businesses.

“There are well known issues with recycling in the UK, including China’s decision to ban foreign waste imports from the start of this year,” said Neil Davies, CEO, Close Brothers Asset Finance.

“But that, along with the public’s increased awareness of the impact of plastic, appears to be accelerating positive changes to the UK’s recycling system, which will make the efforts businesses are making worthwhile.”

Neil Davies, CEO, Close Brothers Asset Finance – “…The public’s increased awareness of the impact of plastic appears to be accelerating positive changes to the UK’s recycling system, which will make the efforts businesses are making worthwhile.”

The survey also found that despite nearly eight out of 10 of the UK’s SMEs actively encouraging their employees to be more environmentally responsible, the cost of goods is still more important than their environmental impact when it comes to procuring products for 76% of business owners.

“These results clearly demonstrate the decisions business owners are faced with every day,” said Neil. “On the one hand they really want to be ethical in the purchasing choices they make, but on the other they need to protect their profits.

“What is encouraging is that the will is obviously there. As less environmentally damaging products become available and, importantly, affordable, they will be considered by those making the purchasing decisions.”

Close to two thirds (64%) of firms would consider offering employees one day off a year to volunteer for environmental causes. In London, the figure rises to 79%.

“Perhaps unsurprisingly, the smaller the firm the more reluctant they are to give people time off for voluntary work,” said Neil. “Only 52% of businesses with less than 10 employees would allow their people time out of the office; this figure rises exponentially the more people they employ and the turnover increases.”

Business owners are far cooler about home working than volunteering, with only 45% of those polled encouraging working from home as a way to reduce their organisation’s carbon footprint and environmental impact; 48% rejected the notion outright with 7% ‘unsure’.