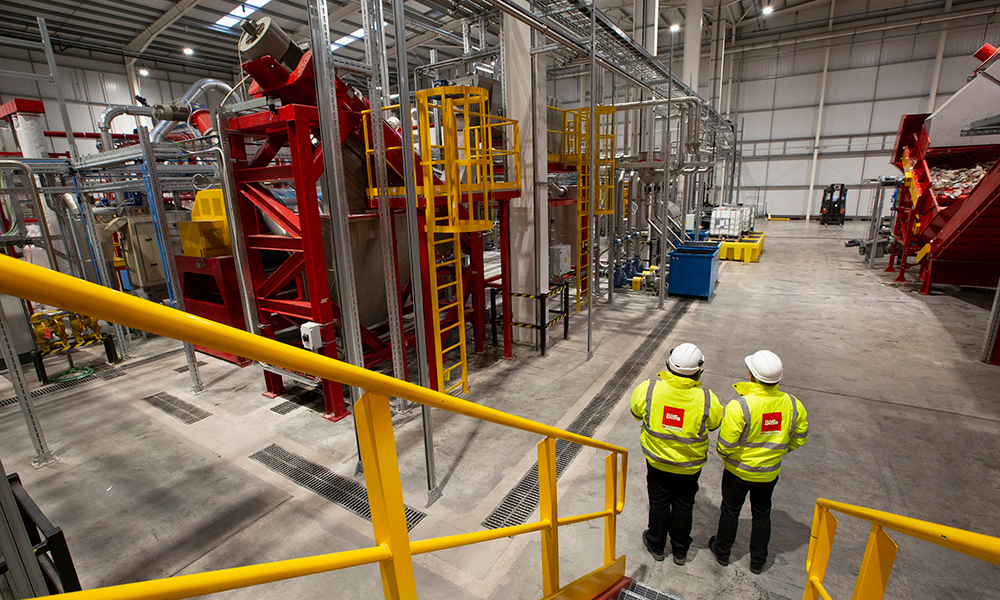 It will be officially unveiled at an opening ceremony by Henri Murison, Director of the Northern Powerhouse Partnership.

Biffa’s investment in the new facility, which is among the most modern and technically advanced of its kind in the world, is part of the Group’s ongoing drive to invest in the UK’s recycling infrastructure to allow more waste to be recycled at home.

The plant is capable of converting 57,000 tonnes of PET plastic per year, equivalent to 1.3bn plastic bottles. PET, or polyethylene terephthalate, is a commonly used material to package soft drinks, popular as it is lightweight, durable, and highly recyclable, producing significantly lower carbon emissions.

At Seaham, Biffa will convert PET back into high-purity plastic pellets to be sold on to drinks makers and other manufacturers to be used for a range of applications, from food and beverage packaging, to clothing. Biffa believes the plant will play an important role in reducing plastic pollution in the UK by improving the country’s ability to recycle through sustainable closed loop systems.

The plant will provide 100 full time jobs in the region, building on Biffa’s established presence in the North where it already employs around 1,600 people. Its importance is signified by the endorsement Biffa has received from the Northern Powerhouse Partnership, which represents the voice of major business and civic leaders across the North, and promotes it as a place in which to live, work and invest.

The new facility, which is expected to generate £40m in revenues per year, is of strategic significance for Biffa as the Group continues to expand its nationwide recycling capabilities. The plant will capitalise on the access to plastic waste that Biffa has through its collections and sorting activities, including the 4.1m tonnes of waste & recycling the Group collects from UK households and businesses every year.

The Seaham facility also builds on Biffa’s existing capabilities in plastics recycling, including its plant in Redcar, North Yorkshire, where Biffa recycles HDPE plastic milk bottles back into food grade recycled HDPE, with 85% of milk bottles sold in the UK now containing Biffa recycled plastics. In 2009, Biffa was granted the Queen’s Award for Enterprise in Innovation for this pioneering closed loop plastics project.

Biffa also announces today a further investment in the North East of England. In the next 12 months Biffa will be building a £7m facility in Washington, which will expand its recycling capabilities for plastic tubs and trays. This will handle approximately 20,000 tonnes of plastic per year and create at least another 30 jobs, providing further investment into the local community.

Facilities like ours at Seaham will help ensure that we can recycle our own plastic waste here in the UK, creating jobs in the green economy and stimulating the development of more sustainable packaging

Commenting on today’s opening, Biffa Chief Executive Michael Topham said: “This facility will help the UK address two of its most pressing issues – plastic waste and the climate emergency.

“Whilst we must work towards reducing overall plastic consumption as a society, the fact remains that plastic has a vital role as a lightweight, durable, low energy-intensity material, that if recycled properly can have a sustainable role in modern life.

“Facilities like ours at Seaham will help ensure that we can recycle our own plastic waste here in the UK, creating jobs in the green economy and stimulating the development of more sustainable packaging.”

Henri Murison, Director of the Northern Powerhouse Partnership, said: “Biffa’s decision to invest in this new, state-of-the-art facility in Seaham will be yet another step in our ambition for the North to close the productivity gap and work towards an extra 850,000 jobs by 2050 by transforming our economy for the better.

“Not only will it help to reduce our overall plastic consumption as a society, it puts the Northern Powerhouse at the heart of the latest recycling capability and is another important step towards a more environmentally sustainable future that the North is uniquely well placed to lead the country and globally.”