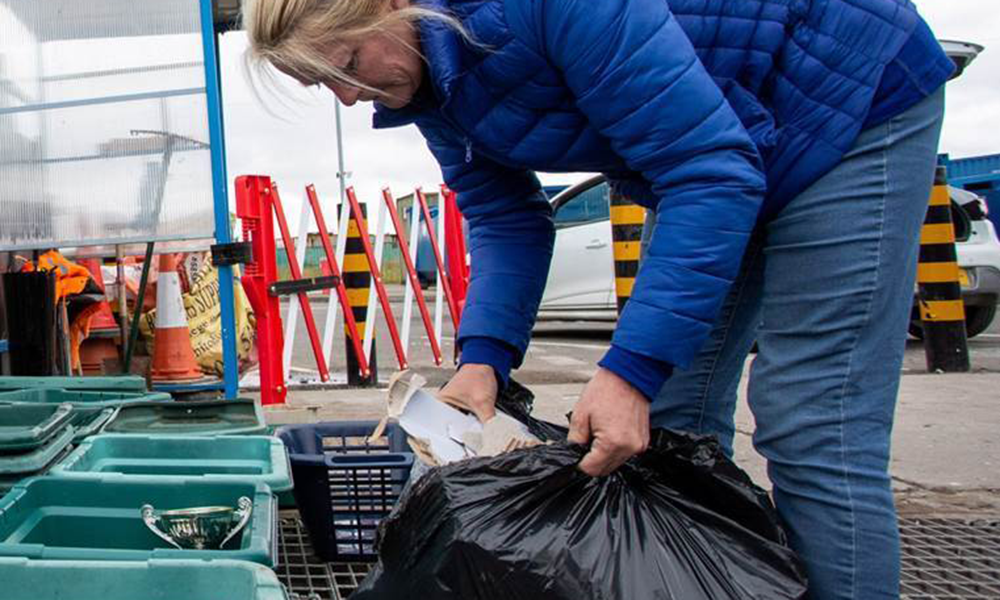 The Vale of Glamorgan’s introduction of a black bag sorting initiative has “drastically improved” recycling rates, it says.

The council says it has also reduced residual waste by changing the way waste is managed.

Working with its waste management partner FCC Environment, and following the introduction of a clear policy to no longer accept un-sorted bags, the Council introduced black bag splitting at its two Household Waste Recycling Centres (HWRCs) in September 2018.

The step-change has contributed to a double-digit increase in recycling rates and a 60 percent reduction in residual waste through the centres.

The Vale of Glamorgan initiative is part of a wider set of policy measures put in place by Resource Efficiency Wales to drive up recycling.

The results speak for themselves and will help go towards Welsh Councils hitting Welsh Government minimum statutory recycling targets of 64 percent for 2019/20 and onwards, rising to minimum 70 percent in 2024/25.

Due to the success, similar schemes have been brought in by two other councils in Wales; Neath Port Talbot and Torfaen County Borough Councils, also in partnership with FCC Environment.

“Black bag splitting, or the refusal to accept unsorted bags/containers on HWRCs and CA sites in the CLAIRE Wales group, has been steadily rolled out by Local Authorities since 2015,” said Resource Efficiency Wales Director James Kay.

“The value of the initiative is that we engage with residents as they arrive on site and can explain why we are no longer accepting un-sorted bags and having their full attention is invaluable for driving long-term behaviour change in austere times. Crucially, a lot of the materials brought to HWRC sites in black bags could have been recycled at the kerbside and this scheme helps to drive that message home.

“The policy has had proven positive effects across a number of Welsh Councils, with each learning from other members of the CLAIRE Wales group. The results speak for themselves and will help go towards Welsh Councils hitting Welsh Government minimum statutory recycling targets of 64 percent for 2019/20 and onwards, rising to minimum 70 percent in 2024/25.”

Torfaen County Borough Council’s Cynon Edwards, Group Leader Strategic Waste and Operations, said: “The experience gained during the introduction at the Vale of Glamorgan reassured us that our scheme, which was rolled out in March 2019, would also be a success.”

Commenting on the changes, FCC Environment Regional Director Steve Longdon said: “The aim is that these new initiatives will encourage long-term behavioural change among residents, meaning that the higher recycling rates and lower disposal volumes are here to stay, and helping our Authority partners continue to meet – even exceed – their recycling targets.”

Prior to introducing its pioneering initiative, the Vale of Glamorgan’s recycling rate stood at 64 percent in 2018, just six percent short of Welsh Government 2024/25 mandatory targets. FCC Environment worked with the Authority to implement changes to the way waste is managed at its Household Waste Recycling Centres, in a bid to improve recycling rates and reduce the amount of residual waste going to landfill.

From an FCC analysis of black bag household waste being taken by residents to its HWRCs, the Council found that that over 60 percent could in fact be recycled.

From a cost perspective, black bag waste containing recyclable material is more expensive to dispose of. So, sorting and segregating the contents not only helps achieve recycling targets but can also save money.

The Authority took the view that the County needed to become more recycling focused. To help achieve this, it asked residents to separate their waste before coming to site, or face having to do it whilst there to ensure there was no recyclable material present.

What were the changes?

The changes to facilitate increased recycling came into effect in September 2018. Residents were asked to sort recyclable from non-recyclable materials at home, so that when visiting the HWRCs items could be quickly and correctly placed in the right skip.

Any resident bringing in bagged waste from this date onwards has been asked by FCC staff to open the bags to show that they do not contain recyclable materials.

If they do, the resident is asked to sort the materials on site or return home to do so. FCC has set up a dedicated sorting area at each of its HWRCs to provide space to do this.

At the same time, residents were given restricted access to the residual waste skip, enabling them to dispose of any non-recyclable waste in this container following the onsite checks.

In addition to stricter scrutiny of bagged waste at the HWRCs by FCC staff, residents were also asked to bring proof of residence, reducing the misuse of sites by people living in other local authority areas.

Residents in the Vale of Glamorgan also experienced the introduction of a fortnightly two-bag kerbside restriction of residual waste. Timing this with the launch of bag splitting at the HWRCs ensured that residents did not divert residual waste into the recycling centres. This two-pronged approach had the ultimate aim of encouraging behavioural change in terms of recycling.

What has been the impact of the changes?

Over the first five months of the initiative, the amount of residual waste fell by an average of 60 percent. As well as improving recycling rates, this saved the Council between £20,000-£30,000 each month in the disposal of residual waste at its Barry site alone