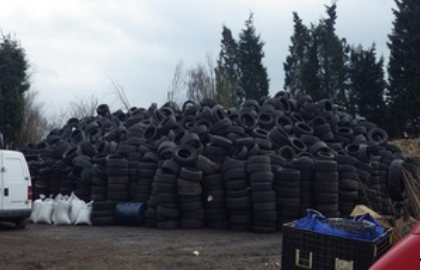 Earlier this week (9 October) Michael Newsome was sentenced to a total of 8 months imprisonment (4 months consecutive for each offence) suspended for 24 months.

Newsome was also ordered to carry out 240 hours of unpaid work for the benefit of the community, ordered to pay a total of £12,131.90 in compensation to the landowners where he abandoned tyres and a contribution of £1,000 costs after pleading guilty to breaking the law in Peterborough and Whittlesey.

Peterborough Magistrates heard that Newsome, aged 28, of Overwater Close, Stukeley Meadows, Huntingdon, traded as Cambridgeshire Rubber Recycling Ltd and even advertised on Facebook as being licensed.

First he set up in Peterborough having registered an exemption that allowed him a limited number of tyres on site to be stored under set conditions for safety.

Mr Gurjit Bdesha, prosecuting for the Environment Agency, told the court that Newsome leased the Dickens Street site from an 82-year-old man to shred tyres, which he failed to do. Instead, he took well in excess of the number of tyres allowed under the exemption and stored them in a way that had no fire breaks.

Mr Bdesha said: “This was especially important as the site is in the middle of a residential area with the nearest home being 13 metres away. Tyres can combust and fire can easily spread.”

“We require operators have an approved fire prevention plan in place before a permit is issued. The Environment Agency seeks to work with operators to ensure compliance with the relevant environmental regulations.”

Despite being asked to move the tyres, Newsome made no effort to clear the site and the landlord ejected him. He later broke into a lockaway on site, damaging the door, to take back equipment belonging to him. He left behind 87 tonnes of tyres (9,050) costing the landlord £8,121.

After being evicted Newsome took on a site at Lazy Acre Farm, Whittlesey and carried on business, failing to even register an exemption.

The landlord became worried at the number of tyres on site with no equipment to process them and asked him to leave.

Mr Bdesha continued: “The landlord was so desperate for Newsome to leave the site and clear the tyres that he was prepared to waive rent arrears of £3,500 if he removed them. The tyres were left there.”

Mr Bdesha told the court that the site was listed as a High Risk Fire site as the tyres were stored within 70 metres of the mainline railway from Birmingham to Stansted Airport. If there had been a fire due to arson or self-combustion then the impact could have resulted in the closure of the railway and caused significant disruption to the national railway transport network.

After the hearing Enforcement Team Leader Phil Henderson said: “We require operators have an approved fire prevention plan in place before a permit is issued. The Environment Agency seeks to work with operators to ensure compliance with the relevant environmental regulations.

“However, as in this case, where those operators fail to take this advice we are compelled to take action, particularly in cases where the storage of waste may risk local residents or our transport infrastructure.”