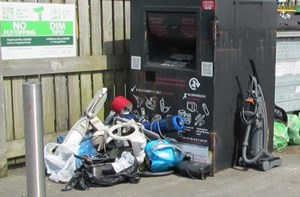 In the first six months of 2017, Carmarthenshire County Council issued 114 Fixed Penalty Notices (FPNs) and prosecuted 18 times for a range of offences from littering, dog fouling and fly-tipping to abandoned vehicles, waste carrier offences and fly-posting.

During July alone, the council issued 26 FPNs for fly-tipping at community recycling banks – designated areas where people can recycle household waste – which have become a hotspot for fly-tipping in recent months.

At just one of the problematic recycling banks in Dafen, Llanelli, 11 FPNs had to be issued where persistent offending was caught on CCTV.

Surveillance at recycling banks has now been prioritised as officers try to tackle the problem, the council says.

“It is completely unacceptable that people think it’s okay to dump their rubbish in our beauty spots and at community recycling sites expecting someone else to clean it up for them.”

The council is now reminding residents that any waste left alongside or placed on the ground at recycling banks is an offence. It urges people to ensure all waste is disposed of in the “correct manner, using the correct containers provided”.

Cllr Philip Hughes, executive board member responsible for enforcement, said: “Carmarthenshire is a beautiful county and we want to keep it clean and tidy for residents and our increasing number of tourists.

“It is completely unacceptable that people think it’s okay to dump their rubbish in our beauty spots and at community recycling sites expecting someone else to clean it up for them.

“We all have our part to play in keeping Carmarthenshire clean – reduce waste, recycle well, use facilities properly and report people who flout the law. Together we can make a difference.”