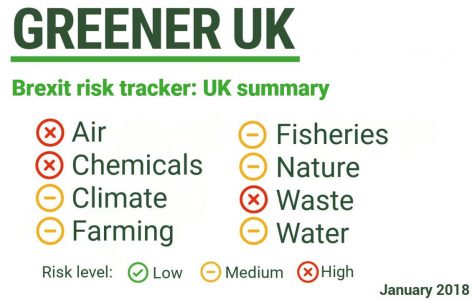 Greener UK has published its latest Brexit Risk Tracker, which assesses the UK government’s performance in planning for a green Brexit, finding that all main areas of environmental policy remain at medium or even “high risk” of being less protected following Brexit.

The government recently published its 25-year plan for the environment, including a pledge to eliminate all avoidable plastic waste by 2042 and plans to consult on a new environmental watchdog.

However, Greener UK, a coalition of leading environmental organisations [including CIWM], has found few signs that the environment is a priority for the government in Brexit negotiations, despite the significant impact Brexit could have.

For example, the Risk Tracker finds that air quality, chemicals and waste are still at “high risk of seeing lower protection post-Brexit”.

The UK is in breach of the Ambient Air Quality Directive and its most recent plan in July 2017 was largely similar to a widely criticised earlier draft. Accompanying guidance to local authorities has lacked detail to meet important legal tests.

Greener UK says is concerned that the Government’s approach is an indication of its likely approach to air quality after the UK leaves.

On chemicals, the UK has asserted that it wants to adopt important rules imposed by the EU regulatory regime, REACH, but campaigners have made it clear that this would be far less effective than staying in REACH with access to its database of safety information.

On waste, despite the government’s announcement on plastic, Greener UK highlights that WRAP has just announced the loss of around 25 jobs, a tenth of its staff, after years of budget cuts from government.

Ot points to disagreements between the UK and EU on emissions trading as exposing divisive tactics that threaten high environmental standards and future collaboration with the EU.

The coalition also points to a forum of UK and devolved government ministers responsible for planning Brexit, which has so far demonstrated little commitment to adopting common frameworks that would ensure a high level of environmental protection across the UK.

“In the last fortnight, the government has pledged to be a global leader on plastic waste, but has made swingeing cuts to one of the main bodies charged with reducing it. There are big questions about whether the government is willing to devote the resources necessary to deliver a green Brexit.”

The Risk Tracker also highlights particular concerns about the capacity of government to plan for and deliver a green Brexit. A recent National Audit Office report has prompted questions about Defra’s capacity to deliver the second most demanding Brexit workload of all departments and to maintain current environmental standards while sustaining significant budget cuts.

Shaun Spiers, chair of Greener UK and executive director of Green Alliance, said: “Michael Gove has been a highly engaged and effective environment secretary and the prime minister has promised to put the environment at the centre of government policy.

“Yet these green aspirations have not carried over to the government’s narrative on Brexit. There are serious concerns about the level of future co-operation between the UK government and the EU, and the impact this will have on issues such as climate change and air quality. We also fear there is a lack of willpower to ensure high standards across the UK when we lose the common frameworks currently provided by the EU.

“In the last fortnight, the government has pledged to be a global leader on plastic waste, but has made swingeing cuts to one of the main bodies charged with reducing it. There are big questions about whether the government is willing to devote the resources necessary to deliver a green Brexit.

“As the government has said, Brexit presents opportunities to restore and enhance our environment. This will not happen without adequate resources and better co-operation between the UK government and the EU, and within the UK.”