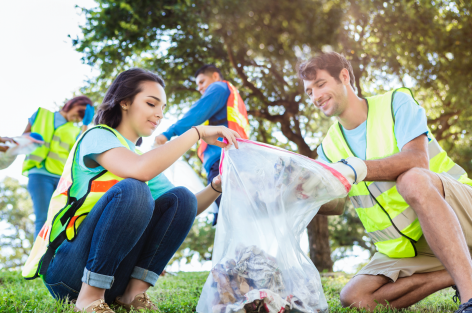 Keep Britain Tidy has announced a new partnership with Coca-Cola GB, which aims to support clean up and litter prevention activity across the country.

Coca-Cola GB will become a key partner in next year’s 2018 Great British Spring Clean, helping to support a network of litter picking heroes to get outdoors and active cleaning up the country.

Working together, both partners hope to inspire volunteers to clean up not only our villages, towns and cities but also our rivers and beaches, creating a chain of litter picking activity, all under the banner #Street2Sea.

With 80% of marine litter estimated to originate from land, the partners hope to bring to life the fact that everybody can play their part in preventing littering not only in their local area but also in our rivers, beaches and seas.

Keep Britain Tidy chief executive, Allison Ogden-Newton – “We are thrilled that Coca-Cola Great Britain is giving the Great British Spring Clean a helping hand so that we can realise our ambition to mobilise up to half a million people next year.”

Alongside this work, Coca-Cola GB is also supporting the charity’s award-winning Centre for Social Innovation to research beach litter and littering behaviour at locations around the country.

The research will help develop new solutions to the problem, which can be scaled up around the country, with a view to changing the behaviour of the small minority who enjoy visiting the beach but think nothing of leaving their rubbish behind.

The new partnership comes as the charity is gearing up to launch next year’s Great British Spring Clean, aiming to build on the success of 2017, which saw more than 300,000 people take to the streets, parks and beaches to clean them up and demonstrate that, for millions of people, littering is an unacceptable blight on our country.

Keep Britain Tidy chief executive, Allison Ogden-Newton, said: “We are thrilled that Coca-Cola Great Britain is giving the Great British Spring Clean a helping hand so that we can realise our ambition to mobilise up to half a million people next year.

“Littering blights every corner of our country and the help of partners is vital if we are to support all the #LitterHeroes out there who are willing to get out there and clean up after those who still think it is OK to drop their rubbish on the ground.”

Jon Woods, general manager at Coca-Cola Great Britain said: “Our partnership with Keep Britain Tidy is one of the many actions we are taking to reduce littering and highlight the importance of recycling in the UK. We look forward to raising awareness of an important environmental issue and helping to clean up British beaches.”