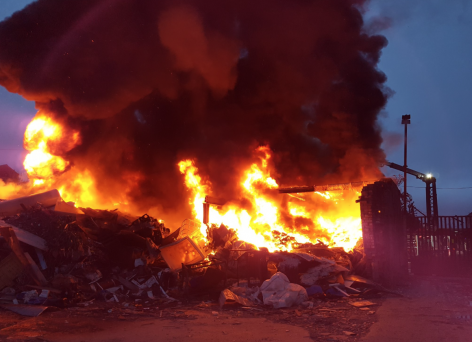 Lancashire Fire and Rescue Service averted what has been called a potentially “catastrophic” incident at a recycling plant.

The blaze, which occurred on Monday (21 August), involved 100 tonnes of plastic waste at the V10 Polymers plant on Paterson Street in Blackburn, Lancashire.

Firefighters used two jets, a water tower, hazardous materials unit and drone to get the fire under control.

The incident was reported at 5.30am and was under control by 8am. Firefighters remained at the scene for the rest of the day. Homes in the area were evacuated due to smoke.

The Blackburn fire station Twitter account said: “Hard work from crews stopped the fire spreading to massive pile of plastic. The result if not stopped would of been catastrophic.”

An investigation is now underway to determine the cause of the fire.