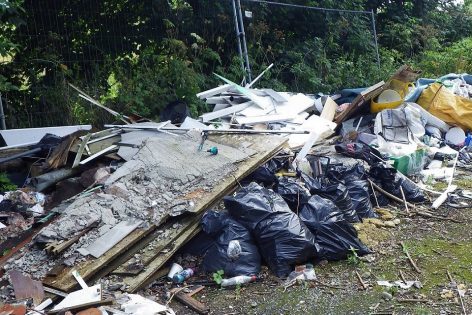 Fly-tipping incidents reported by local authorities topped one million in 2016/17, an increase of 7% on the previous year.

The estimated cost of clearance for fly-tipping to local authorities in England in 2016/17 was £57.7m.

Consistent with previous years, the most common place for fly-tipping to occur was on highways, which accounted for almost half (49%) of total incidents in 2016/17. The number of highway incidents has increased by 4% from 2015/16.

Keep Britain Tidy – “Enough is enough. It is time to give councils the resources they need to tackle this problem head-on, using some of the proceeds of the landfill tax”

As in the last few years, the most common size category for fly-tipping incidents in 2016/17 was equivalent to a ‘small van load’ (33% of total incidents), followed by the equivalent of a ‘car boot’ (27%).

These statistics are based on fly-tipping incidents reported by local authorities in England, and exclude the majority of private-land incidents.

Responding to the news, Keep Britain Tidy said the figures were shocking but perhaps “not surprising”.

It said the continuing cuts to local authority budgets present huge challenge for councils who are tackling this rising tide of waste at the same time as trying to provide social care, education and all the other services that people demand.

The charity also posed the question of whether it’s time to give councils the “resources they need” to educate the public on their responsibilities, keep household waste recycling centres open, offer an affordable bulky waste collection service and investigate and prosecute fly-tippers.

Keep Britain Tidy Chief Executive Allison Ogden-Newton said: “Enough is enough. It is time to give councils the resources they need to tackle this problem head-on, using some of the proceeds of the landfill tax.

Local Government Association – “Not only does fly-tipping create an eyesore for residents, it is also a serious public health risk, creating pollution and attracting rats and other vermin.”

“We also need the people of Britain to stop treating our country like one giant tip, to take responsibility for their unwanted stuff and make sure that, if they give their waste to someone else to dispose of, they are going to dispose of it legally.

“This fly-tipping epidemic is the reason we launched our #CrimeNotToCare campaign in March this year, to help local authorities educate their residents and enable them to do the right thing.

“There is no excuse for fly-tipping, it is illegal and those who do it must be held to account.”

Cllr Martin Tett, the Local Government Association’s Environment spokesman, said: “Litter and fly-tipping is environmental vandalism – it’s unpleasant, unnecessary and unacceptable. Not only does fly-tipping create an eyesore for residents, it is also a serious public health risk, creating pollution and attracting rats and other vermin.

“Clearing up fly-tipping is costing councils more than £57m a year – money that could be spent on other services, like caring for the elderly, protecting children or tackling homelessness. It is unacceptable that they are having to spend vast amounts each year tackling this scourge.

“The Government has responded to our call for councils to be able to apply Fixed Penalty Notices for small scale fly-tipping – and this is a big step in the right direction. When they take offenders to court, councils need a faster and more effective legal system which means fly-tippers are given hard-hitting fines for more serious offences. Manufacturers also need to provide more take-back services so people can hand in old furniture and mattresses when they buy new ones.”