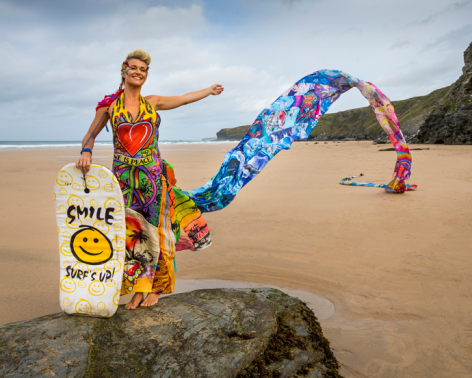 Environmental charity, Keep Britain Tidy’s BeachCare programme has teamed up with Linda Thomas Eco Design to highlight the problem of the cheap polystyrene bodyboards and the amount of waste they create by unveiling a stunning #WaveOfWaste dress, complete with 22-metre train, created using fabric taken from snapped bodyboards found on Devon and Cornwall’s beaches.

This summer, from just three beaches, BeachCare collected a shocking 560 of the cheap and poorly constructed bodyboards, which had been either stuffed in bins, dumped in sand dunes or left on the beach.

Designer Dr Linda Thomas says: “I was shocked by the image from 2016 showing a huge wall of waste boards and the enormity of this problem. As a family, we love visiting Cornwall and the sea and know how important clean seas are for both wildlife and all the people that enjoy the coast.

“I wanted to create something eye-catching to highlight the problem. I understand the issue, as I bought one of these “snappers” for my son years ago not realising what they are like, it was so rubbish for catching waves and didn’t last the season.

“I want to help other families to be informed so that their child can have a better, safer time in the sea. Even if money is a big issue, these ‘snappers’ are such poor value that they are letting down both families and the environment.”

The #WaveOfWaste Dress was premiered at the Watergate Bay Hotel on Friday, modelled by former pro surfer and Newquay resident Emma Adams. A team of volunteers were needed help to hold up the giant 22-metre train and the #WaveOfWaste dress will then go on tour around the country to raise awareness of the issue.

Neil Hembrow, Keep Britain Tidy’s BeachCare Officer, said: “We are only touching the surface here. The impact more plastic entering our marine environment is devastating for wildlife and we also estimate that more than 14,000 of these boards are heading to landfill each summer season, costing tax payers money.

“Although better-quality boards may cost more, they are more likely to last ten summer holidays rather than just ten minutes. These cheap boards are manufactured in China, shipped more than 11,000 miles, distributed to stores and surfed for ten minutes before breaking and going to landfill. They are shipped across the planet to end up buried in the South West.”

BeachCare has been working hard to find a solution for recycling the waste. Some of the boards will go to “Children’s Scrapstore” in Bristol and some of the leftover polystyrene will be used by Gavin Randall from Traditional Surfing Co in Sennen Cove as insulation for a new workshop.

Some of the polystyrene will end up as waste. Despite lots of requests from BeachCare, no company has been willing to re-process the polystyrene due to salt and sand contamination. Polystyrene has little value as a recycled material because it is high volume and light. Transportation costs often exceed the value of the waste.