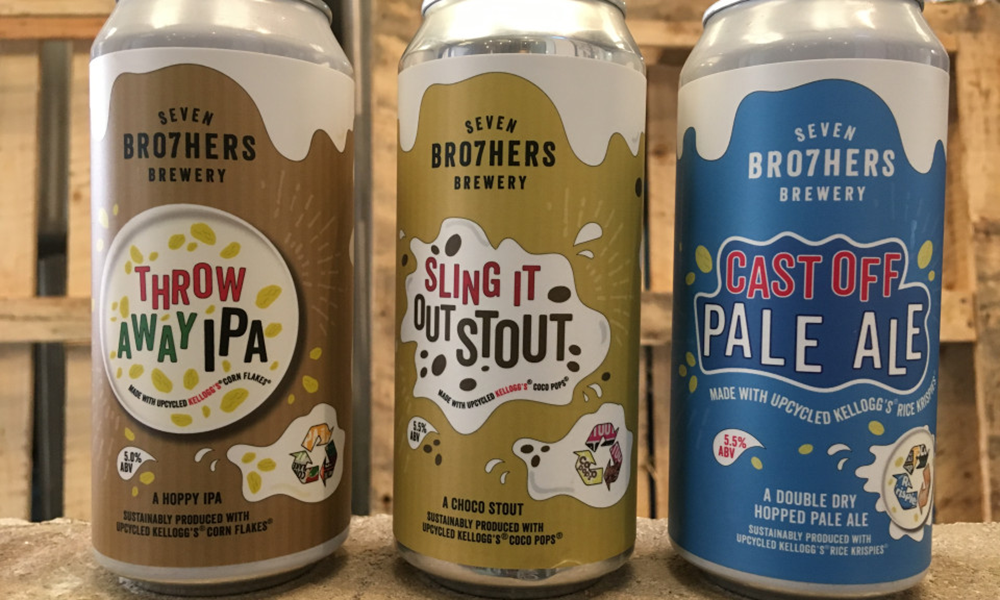 Kellogg’s has teamed up with Salford brewery, Seven Bro7hers, to turn its ‘less-than-perfect’ Rice Krispies and Coco Pops into beer.

Following the success of the ‘Throw Away IPA’ – made from surplus Kellogg’s Corn Flakes – the brewers have created a coco-based ‘Sling it out Stout’ and a snap, crackle and pop ‘Cast off Pale Ale’.

The beers are made from discarded grains created in the cooking process at the cereal giant’s Manchester factory.

The new craft beers are made from rice-based flakes that are perhaps overcooked, uncoated or discoloured, and therefore have not passed Kellogg’s strict quality control, would not make it into the pack and would inevitably go to animal feed.

Keen to seek out new opportunities to upcycle its food waste rather than throw it away, the breakfast giant approached Seven Bro7hers about the prospect of expanding the range from the Kellogg’s Corn Flakes IPA to its wider portfolio.

The new craft beers are made from rice-based flakes that are perhaps overcooked, uncoated or discoloured, and therefore have not passed Kellogg’s strict quality control

Launching ‘Sling it Out Stout’ and ‘Cast off Pale Ale’, corporate social responsibility manager for Kellogg’s UK and Ireland, Kate Prince, said: “Our primary objective is to convert every kilo of grain we buy into food that we can see. However, that’s not always possible.

“Kellogg’s is always looking for innovative ways to use surplus food. The collaboration with Seven Bro7thers is a fun way to repurpose non-packaged, less-than-perfect cereal. This activity is part of our new ‘Better Days’ commitments which aim to reduce our impact on the planet.”

The Sling it Out Stout brew – which was perfected over five days in the brothers Salford brewery – uses 80kg of Kellogg’s Coco Pops to replace malted barley, during the ‘mash’ process the cereal creates the chocolatey taste.

A similar process is used for the ‘Cast off Pale Ale’, using 80kg of Kellogg’s Rice Krispies to replace malted barley with the cereal creating sweet notes in the beer.

The Limited edition Kellogg’s Corn Flakes based beer ‘Throw Away IPA’ – which ‘broke the internet’ in November 2018 is back, and will also be available as part of the trio.

The three beer collection will be sold on tap across Manchester in Seven Bro7hers Brewery hang outs as well as stockists of the brewer from Thursday 13 June.

Keith McAcvoy, founder of Seven Bro7hers Brewery, in Salford, said: “Working with Kellogg’s on the production of our first sustainability conscious beer Throw Away IPA was amazing.

“To carry on with this partnership and create two new exciting craft beers is even better. We are extremely proud to be working with Kellogg’s and being part of the fight against food waste.”