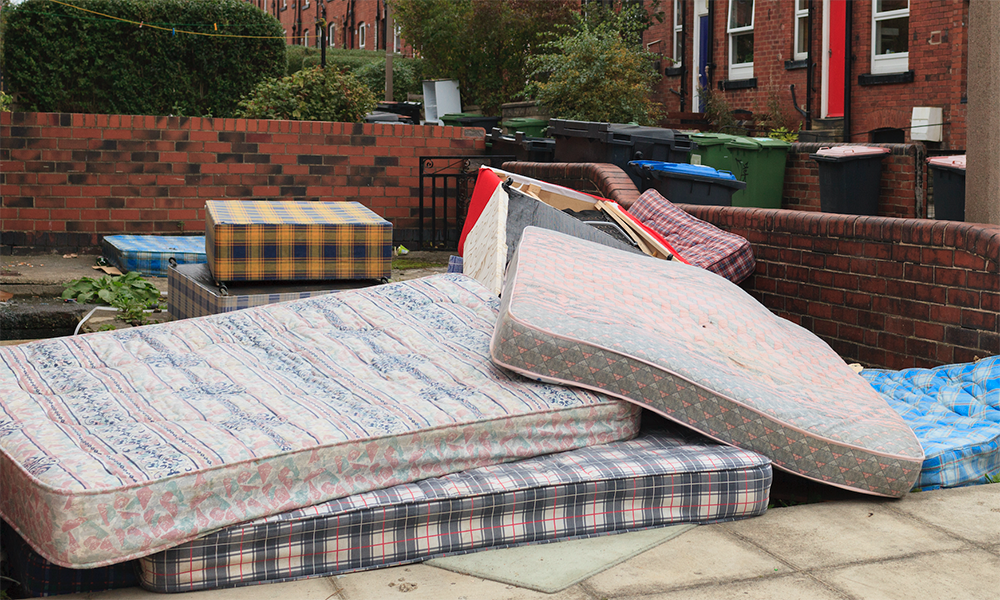 The Local Government Association (LGA) is calling for mattress manufacturers to be forced to recycle their own products and offer take-back services to stop them being illegally fly-tipped and reduce cost pressures on council recycling and waste disposal centres.

The lack of a comprehensive take-back and recycling scheme is leaving councils to pick up the slack, it says.

Mattresses, which need specialist treatment due to their bulky nature and mix of metal and fabric components, are fuelling cost pressures on waste and recycling centres, the LGA says. It says some councils have introduced charges for non-household waste to help keep waste and recycling centres open, citing landfill tax increasing alongside landfill gate fees – which are expected to rise further as available landfill capacity reduces.

Councils are reducing waste sent to landfill and send more mattresses for recycling than commercial organisations. But mattresses – which are free for householders to dispose of at council-run waste and recycling centres – still made up 13 per cent of waste illegally dumped in England between 2013 and 2018, it says.

The increase in choices of bedding and people now being advised to replace mattresses after eight years, rather than 12, is also thought to be fuelling sales and creating more mattresses in circulation – and a greater need to recycle them to reduce landfill.

Mattresses are bulky and hard to throw away, but are generally recyclable. Manufacturers need to take responsibility for the life-cycle of their mattresses and help councils and consumers dispose of them responsibly.

The LGA, which represents councils in England and Wales, wants manufacturers to be forced to recycle their mattresses and offer take-back services, which will enable people to return them instead of throwing them away. This would help to reduce fly-tipping which has soared by 50 per cent in the past six years and costs councils in England £58 million a year to clear up.

The LGA also wants to work with the Government on reviewing sentencing guidelines for fly-tipping, so offenders are given bigger fines for more serious offences, and to ensure councils have the funding needed to investigate incidents.

LGA Environment spokesman Cllr David Renard said:“Dumped mattresses made up a quarter of all fly-tipping incidents in some areas in the past five years.

“Unwanted mattresses are fuelling landfill costs which continue to rise, putting pressure on waste and recycling centres which councils are working hard to keep open.

“Mattresses are bulky and hard to throw away, but are generally recyclable. Manufacturers need to take responsibility for the life-cycle of their mattresses and help councils and consumers dispose of them responsibly.

“Alongside being forced to offer take-back services and recycle mattresses as part of a circular economy, manufacturers need to be made to introduce mandatory take-back schemes to help reduce mattresses being dumped illegally and contributing to a fly-tipping bill of nearly £60 million a year to taxpayers in England.

“Fly-tipping is an illegal and inexcusable blight on society. Offenders need to be given bigger fines and councils need adequate funding to investigate incidents.”