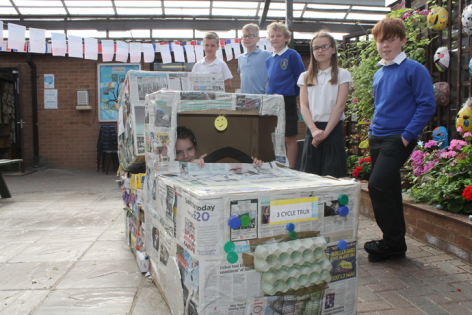 As part of its drive to educate children on recycling, Mick George Ltd has, for the last eight-weeks, been giving school Children in Cambridgeshire, Leicestershire, Boston and Northamptonshire the chance to win £1,000 for their school, as well as supplementary prizes for their efforts.

The company set the challenge for children to create their very own Recycle-Trux out of recyclable materials. An abundance of applications were received, and after much deliberation a selection of winners were chosen from each territory, who were adjudged to have produced the outstanding pieces of creativity, and in doing so, scooped the respective £1,000 prize fund for the school.

The animated themed initiative was tasked with providing youngsters with a better understanding of the impact that waste has on the environment, encouraging them to reduce, reuse and recycle for a greener future.

In addition to the environmental awareness and creative benefits of the campaign design, numerous other educational benefits were achieved. Pupil workbooks assessed KS2 curriculum; Art, Maths, Literacy, and Comprehension, with a second prize dedicated to the best designed Recycle-Trux.

This prize went to:

Jon Stump, Finance Director at Mick George Ltd commented: “Every day we see various stories related to the state of the environment, now and in the future. As with many of our initiatives, such as the ‘Safer Roads’ campaign, we’re continuously engaging with local schools to help educate on important matters that will influence children forever. Recycle-Trux was no different.”

Stump continued: “Having completed similar competitions in previous years with ‘Skips for Schools’ and ‘Recycle.Bots’, the prequel to this initiative, we recognised this was a good method for getting children to engage with the world of waste. The format seemed to be very well received, and the level of ability, time and effort that has been put it to the applications submitted should be applauded. Each and every school that contributed, should be immensely proud of their efforts.”