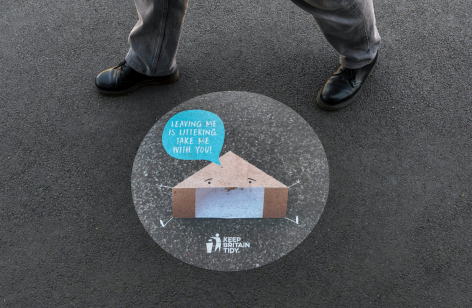 A new intervention to tackle “careful” littering – the coffee cup left on a window ledge, the sandwich wrapper abandoned on a park bench – has been launched, following a successful pilot that saw signs placed in areas where rubbish is most commonly found.

The launch comes after a survey carried out for Keep Britain Tidy by YouGov revealed that more than a quarter of people (27%) admitted to littering: leaving packaging behind when eating or drinking ‘on the go’; leaving a can or coffee cup on a wall or ledge; leaving rubbish at a train station or bus stop before boarding.

The series of posters and floor vinyls were developed by the charity’s Centre for Social Innovation to tackle the moments when people might carefully place litter on the ground or a surface before eventually walking away and leaving it, offering a gentle reminder that, whether it ‘carefully’ placed or simply thrown on the floor, it’s #StillLittering.

“With more than one in four people admitting to ‘careful’ littering, this intervention is a simple and effective way to get the message across to them in the place and at the moment when they’re likely to do it.”

The trial, conducted by Keep Britain Tidy and made possible thanks to support of the players of People’s Postcode Lottery, took place in town centres, bus stops and parks across the country and saw the total amount of litter reduced by a fifth (20%). In some areas, the reduction was up to 57%.

Out of the 1,072 people polled by Keep Britain Tidy in the trial areas, nearly two thirds (63%) say the intervention will stop them from leaving litter behind again. Furthermore, eight in ten (88%) felt the intervention was tackling something which is an issue in their area and 91% said they would like to see the intervention put into other locations.

Allison Ogden-Newton, CEO of environmental charity Keep Britain Tidy, said: “We all need to care for the environment on our doorstep to reduce litter and, as a result, help tackle plastic pollution, which is doing so much damage to our marine environment.

“This intervention shows it is possible to make a huge difference to the amount of litter left behind by people. By highlighting that placing a coffee cup on a shop window sill is just as bad as mindlessly throwing litter on the ground is clearly making people think twice and to do it less.

“With more than one in four people admitting to ‘careful’ littering, this intervention is a simple and effective way to get the message across to them in the place and at the moment when they’re likely to do it.”

Following the success of the pilot, the intervention launched in Manchester earlier this week and is now available to local authorities across the country.