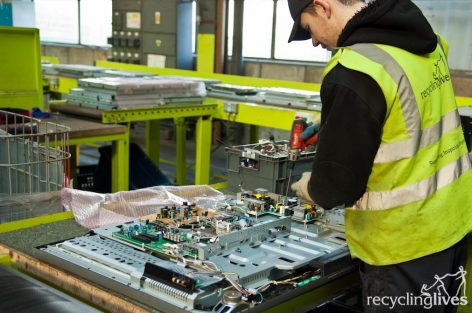 The partnership – between Amey, Recycling Lives and HMP Dovegate – has seen a dedicated recycling academy set up within the prison, where up to 40 offenders will strip out glass, plastics, circuit boards and wiring from the televisions.

The workshop is the 10th HMP Academy set up by Recycling Lives and is dedicated to taking television sets from Amey’s Household Waste Recycling Centres in Cambridgeshire, Central Bedfordshire, Hertfordshire and Northamptonshire.

Recycling Lives is a unique recycling business, using its commercial operations to sustain its own charitable programmes. Its HMP Academies programme, operational in 10 UK prisons, is significantly reducing reoffending by supporting men and women through training and work both pre- and post-release.

More than 133,000 televisions will be recycled every year (around 1,700 tonnes) as part of the scheme to upskill and rehabilitate offenders.

“We know that prisoners who have a job are less likely to reoffend and end up back in prison. This Academy is an innovative way to teach prisoners skills that will help them to find employment when they re-join society at the end of their sentence and I look forward to seeing the first of our prisoners completing the workshop.”

Prisons Minister Rory Stewart said: “I am grateful to HMP Dovegate, Amey and Recycling Lives for their work in creating this HMP Academy. Initiatives like this create a platform for offenders to go on and make a meaningful contribution to society – turning their backs on crime for good. We owe a debt of gratitude to everyone who helps prisoners find work and we want to encourage more employers to take on offenders and help them transform their lives.”

Alasdair Jackson, Operations Director for Recycling Lives, said: “At Recycling Lives we create social impact from every commercial contract. Our partnership with Amey contributes to our creation of social value, saving the taxpayer millions each year as we rehabilitate offenders.

“We’re now looking forward to an even stronger partnership with Amey as we launch the HMP Dovegate Academy, where we’ll recycle at the same time as supporting offenders’ rehabilitation. We’re also looking to set up more recycling hubs to support Amey’s waste management in the prisons they manage.”

John Hewitson, Serco’s Contract Director at HMP Dovegate said: “We know that prisoners who have a job are less likely to reoffend and end up back in prison. This Academy is an innovative way to teach prisoners skills that will help them to find employment when they re-join society at the end of their sentence and I look forward to seeing the first of our prisoners completing the workshop.”

Amey’s Paul Kirkup added: “As a company which works both in the waste industry and for the Ministry of Justice (where we provide facilities management in prisons), this scheme really does allow Amey to provide a joined-up approach to supporting offenders, so when they leave they are going into work opportunities with confidence for themselves and their families – reducing the likelihood of re-offending.

“Amey has already been working with Recycling Lives for six months but the new, dedicated Academy will now see TV sets from Amey’s 39 Household Waste Recycling Centres transported to HMP Dovegate for recycling.”

Once the component parts have been extracted at HMP Dovegate, they will go to Recycling Lives’ 15-acre Recycling Park in Preston for final sorting, before going to the global commodities market for processing into new products.

The HMP Academies have proved to be a major success in upskilling and rehabilitating offenders, with over 200 men and women employed within them at any one time. Between 2015-17, of the 75 men and women released after working in Academies, just two reoffended while the remainder were rehabilitated and supported into work – creating £5.3m social value by reducing reoffending.

Offenders will have to apply for a role in the HMP Dovegate Academy and there are often waiting lists to join Recycling Lives’ HMP Academies. Participants earn an enhanced wage – Recycling Lives is the highest paying organisation in the prison estate – and have opportunity to gain transferable and sector-specific qualifications, such as a fork lift truck licence.

In addition to the work with Recycling Lives, Amey is also helping unlock opportunities for offenders directly through its Ministry of Justice Facilities Management contract. A Passport to Employment scheme at HMPs Liverpool, Lancaster Farms and Hewell is providing high-quality work placements within Amey’s facilities management operations linked to vocational education, with the aim of increasing employment opportunities on release. Plans to work with three further prisons are in progress as part of the work Amey is doing in partnership with the MoJ and HMPPS to develop rehabilitate environments across the custodial estate.