A new report launched this week by the Ellen MacArthur Foundation has claimed that every second, the equivalent of one refuse truck of textiles is either landfilled or burned worldwide, while an estimated $500bn in value is lost every year due to clothing that’s barely worn and rarely recycled.

The report, “A new textiles economy: Redesigning fashion’s future”, created by the Circular Fibres Initiative, calls for the fashion industry to adopt this a vision and create cross industry collaborations to achieve it. It was launched by Ellen MacArthur herself, along with world-renowned fashion designer, Stella McCartney.

The report states that it “…outlines a vision for a system that works, delivering long-term benefits – a new textiles economy based on the principles of a circular economy. It offers a direction of travel on which the industry can agree and focus its efforts. In a new textiles economy, clothes, textiles, and fibres are kept at their highest value during use and re-enter the economy afterwards, never ending up as waste. This vision is distinct from, and complements, ongoing efforts to make the textiles system more sustainable by minimising its negative impacts. With specific emphasis on innovation towards a different system, a new textiles economy presents an opportunity to deliver substantially better economic, societal, and environmental outcomes.”

The Ellen MacArthur Foundation explained that every second, the equivalent of one garbage truck of textiles is landfilled or burned and an estimated $500bn value is lost every year due to clothing that’s barely worn and rarely recycled. It says that if nothing changes, by 2050 the fashion industry will use up a quarter of the world’s carbon budget and that as well as being wasteful, the industry is polluting as clothes release half a million tonnes of microfibres into the ocean every year, equivalent to more than 50 billion plastic bottles. 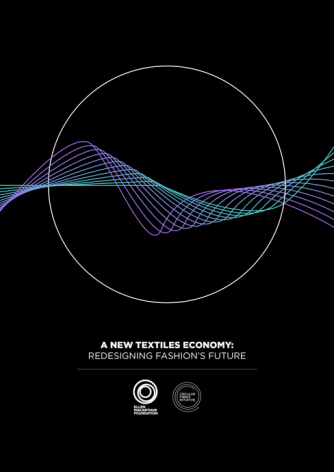 “Today’s textile industry is built on an outdated linear, take-make-dispose model and is hugely wasteful and polluting. [This report] presents an ambitious vision of a new system, based on circular economy principles, that offers benefits to the economy, society, and the environment. We need the whole industry to rally behind it,” commented Ellen MacArthur.

“What really excites me about ‘A new textiles economy: Redesigning fashion’s future’ is that it provides solutions to an industry that is incredibly wasteful and harmful to the environment. The report presents a roadmap for us to create better businesses and a better environment. It opens up the conversation that will allow us to find a way to work together to better our industry, for the future of fashion and for the future of the planet,” added Stella McCartney.

Creating a new textiles economy sets a new level of ambition for the fashion industry, and will require an unprecedented scale and depth of collaboration. Industry leaders including Core Partners H&M, Lenzing, and NIKE Inc., and C&A Foundation as Philanthropic Funder, endorse the new vision and report, to which they and over 40 influential fashion brands, leading businesses, NGOs, public bodies, and experts have contributed. McKinsey & Company has also contributed research and analysis. Now the Ellen MacArthur Foundation is calling on the entire industry to rally behind this new vision and to launch a new wave of cross-industry collaboration and innovation to achieve it.