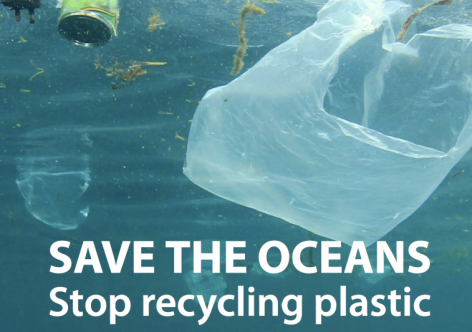 A report from the Global Warming Policy Foundation (GWPF) today (28 June) claims that efforts to recycle plastic are a major cause of the marine litter problem.

The report sets out what it’s calling the “case for incinerating waste rather than trying to recycle it”.

The report, “Save the Oceans, Stop Recycling Plastics”, says that most of the world’s plastic waste comes from just a few countries, mostly in Asia and Africa, and that 25% is “leakage” from Asian waste management processes — the rest is waste that has never been collected, but is simply thrown into rivers.

It says European countries ship “huge quantities” of waste into Asian waste management streams, seemingly for recycling, but as much as 20% – millions of tonnes every year – ends up in the oceans.

The report also claims that since the Chinese banned waste imports at the start of the year, shipments have been diverted to other Asian countries with even weaker environmental controls (Figure 1). 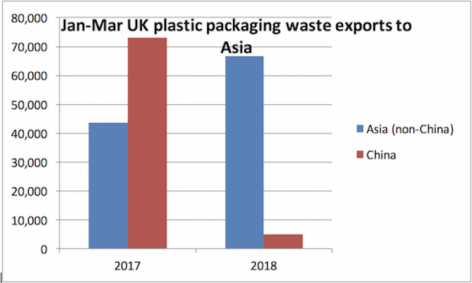 Annually over 10m metric tonnes of plastic litter end up in oceans, harming wildlife. The International Solid Waste Association (ISWA) figures show 75% of land-based marine litter in low to upper-middle income economies comes from litter and uncollected waste, while the remaining 25% of the land-based sources is plastic leaks from within the waste management system.

The report states this 25% is “attributable to the waste management option preferred by green ideologues; meanwhile, waste incineration can prevent any leakage of plastic if municipal solid waste is incinerated along with sewage sludge. Despite this, incineration is vehemently opposed by green ideologues and also by the EU, which chooses to believe in the mirage of a circular economy.”

“If the EU was serious about its war against marine pollution it should consider banning the export of plastic recyclate rather than banning plastic straws or taxing incineration.”

Author of the report, Dr Mikko Paunio says: “It is clear that the European contribution to marine waste is a result of our efforts to recycle. However, several countries have already shown that they can reduce this contribution to near zero, by simply incinerating waste.”

Dr Pauni says the EU is trying to redouble recycling efforts and to close down the incineration route, “mistakenly believing that this will reduce carbon emissions”.

“The effects look as though they will be appalling,” he says. “We can expect a great deal more plastic to end up in the environment, and in the oceans in particular.

“If the EU was serious about its war against marine pollution it should consider banning the export of plastic recyclate rather than banning plastic straws or taxing incineration.”

Peter Jones, principal consultant for environmental consultancy Eunomia, has responded to the report in the well-regarded environmental blog Isonomia, where he calls into question the arguments set out in the report. To read it in full click here.

The Global Warming Policy Foundation is an “all-party and non-party” think tank and a registered educational charity. It’s website states that while it is “open-minded on the contested science of global warming”, it is deeply concerned about the costs and other implications of many of the policies currently being advocated.

The Global Warming Policy Foundation was launched by Lord Lawson and Dr Benny Peiser on 23 November 2009 in the House of Lords – in the run-up to the Copenhagen Climate Summit.