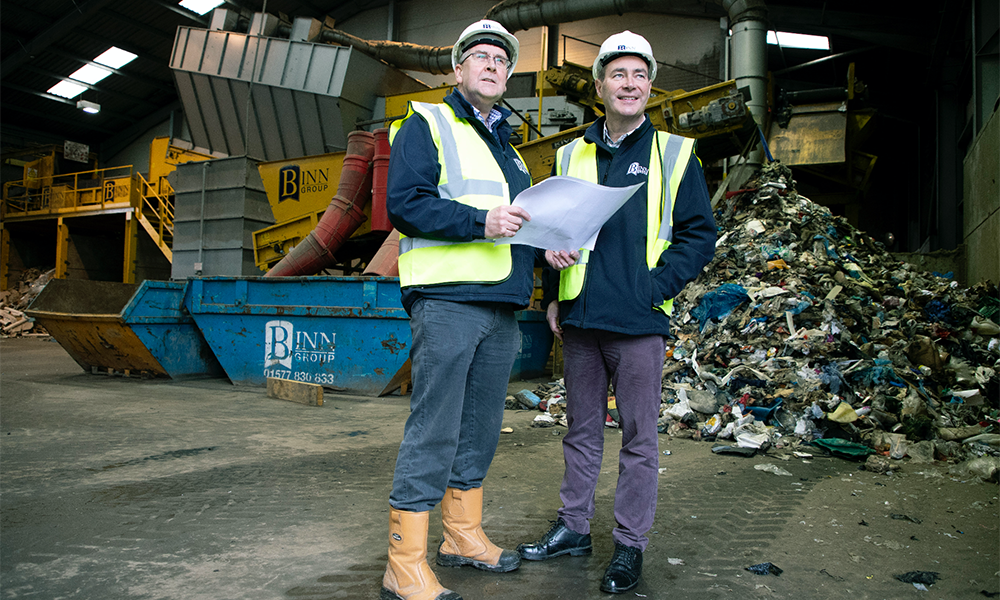 Revised plans are being lodged with Perth and Kinross Council to progress the £70 million development of a “next generation” energy from waste (EfW) plant at Binn EcoPark near Glenfarg.

Owners Binn Group is seeking approval to upgrade existing permission previously granted in 2006, which it says will enable it to tackle Scotland’s growing need for alternative resource management solutions to landfill at a local level.

The new plans request a 41% increase in incinerator capacity and modifications to the building design which Binn Group claim are “crucial” in meeting demand for a lower carbon solution to the area’s non-recyclable waste issues.

Revised plans envisage increasing the plant capacity from 60,000 tonnes to 84,900 tonnes per annum – retaining it as one of the smallest commercial EfW plants in the UK and the smallest on mainland Scotland.

If plans are approved, we would hope to start work later this year, creating 200 jobs during the 28-month construction and development phase, with 30 permanent jobs once the plant is operational – hopefully by early 2023

Binn Group Chief Executive Allan MacGregor said that the modified plans would allow the company to progress with a development which would bring significant employment and economic benefits to the area as well as providing a cleaner solution for non-recyclable waste.

“If plans are approved, we would hope to start work later this year, creating 200 jobs during the 28-month construction and development phase, with 30 permanent jobs once the plant is operational – hopefully by early 2023,” he explained.

“The work represents a £70 million capital investment and will ultimately result in an estimated Gross Value Added (GVA) of around £12.6 million for Scotland and £2.8 million locally. The captured electricity will feed the national grid and as a component of the energy is renewable, will contribute to the ongoing decarbonisation of Scotland’s power supply.

A Scottish Government ban on waste being sent to landfill – due to be enforced within a few years – “necessitated” the urgent need for alternative solutions for non-recyclable waste, Mr MacGregor says.

“Too much of this resource stream is currently shipped abroad when we could process it here through a more carbon-friendly solution such as EfW,” he said.

“Binn Group strongly believes that smaller multi-technical resource management platforms should be developed at local level to manage waste streams as close to their generation point as possible.”

“Our proposed plant will offer an option for both local businesses and industry – and neighbouring local authorities – to meet their legal obligations,” he said. “By offering a low carbon solution to combat a national problem at local level, Binn Group will play a key role in supporting the transition away from landfill and help drive the Government’s Zero Waste Strategy.”

The previously approved EfW facility under review is part of the 200-acre Binn EcoPark site, designated for waste management uses in the adopted Local Development Plan 2019.

Brian Ritchie, Chairman of Resource Management Association Scotland (RMAS) welcomed the news that Binn Group plan to progress what the Association perceive as “a vital resource” in helping to tackle the country’s waste problems.

“This facility will provide a solution for the non-recyclable residual waste generated on site and from neighbouring local authorities and private waste contractors,” he said, “as well as contributing to the infrastructure Scotland needs to take full responsibility for its own residual waste.”

The amendments to planning consent being sought by Binn Group represent a Schedule 2 application which does not require a public consultation process.

Binn Group, however, plan to host a series of public information meetings and online community engagement platforms to inform the public of their evolving proposals.

Various reports looking at issues such as environmental impact, traffic management and ecological consequences from the amended plans have also been undertaken, identifying no significant concerns.