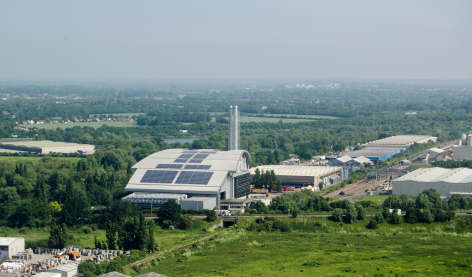 The UK faces a “severe shortage of vital waste treatment infrastructure” over the next decade, according to new research findings of SUEZ recycling and recovery UK.

The shortage relates primarily to a lack of energy-from-waste (EfW) power plants, which are replacing landfill sites as the preferred, more sustainable, waste disposal solution for non-recyclable “residual” waste, the company says.

SUEZ, which deals with nearly 10m tonnes of the UK’s waste each year, has conducted the research for a new report entitled Mind the Gap 2017-2030, which is due to be formally published in September and launched at the RWM exhibition at the Birmingham NEC on 12 September 2017.

The findings contradict the recently-published findings of a report by environmental consultancy Eunomia, which found that the UK’s supply of waste treatment capacity will exceed the available quantity of residual waste in 2020/21.

“Back in 2014 SUEZ warned government that the UK has, and will continue to have, a structural waste treatment capacity gap. Brexit will now exacerbate the problem”

SUEZ says that landfills are closing at a faster rate than anticipated, with some regions of the UK facing the “virtual elimination” of easily accessible landfill sites within the next five years, putting additional pressure on what it calls “scarce” alternative EfW treatment capacity.

Today, the UK currently throws away around 60-70m tonnes of household and non-hazardous commercial and industrial waste (according to forecast figures based on SUEZ modelling) each year, much of which still ends up in landfill. But, due to the closure of many landfill sites and what SUEZ calls “insufficient EfW capacity”, the UK now exports over 3m tonnes a year of waste to Europe for EfW treatment.

SUEZ says its research has identified a serious capacity deficit, or “gap”, between waste volumes needing non landfill treatment and the available capacity to treat this waste in domestic and overseas EfW plants.

Forecasting over a decade-long horizon, SUEZ says its projections indicate a current national shortfall of nearly 14m tonnes of domestic treatment capacity, dropping to just under 8m tonnes by 2022 and approximately 3m in 2027.

The gap diminishes over this period as facilities in the planning pipeline are built and recycling increases – although SUEZ’s figures assume a modest combined national recycling rate increase to 55% over the next decade, which the UK may still struggle to achieve based on current household recycling performance (which remains stagnant at 45%), SUEZ says.

An increase in recycling must also be accompanied by more recycling infrastructure, which SUEZ says its predictions show will require a further £1bn investment over the time period.

Even though the gap diminishes, the 3m tonne capacity shortfall in 2027 represents the equivalent capacity of 10 typically-sized EfW plants, which would together cost more than £2bn to build and have the combined electricity output to power half a million British homes.

A “hard Brexit” is likely to contribute to this capacity gap as the 3m tonnes of waste-derived fuel, currently exported to Northern Europe and Scandinavia, is rapidly re-shored to the UK – a real possibility if export tariffs, poor foreign exchange rates, European waste policy or border restrictions render exports financially or politically unviable.

However, even assuming available finance, the planning and construction for EfW facilities takes a minimum of five years and often much longer, which means that much of the material re-shored over the next decade would likely need to be sent to the UK’s “rapidly dwindling” landfill sites – although some UK regions are close to depleting their supply of available landfill, waste will need to be hauled to other regions where capacity still exists.

The South East and London will be hit particularly hard because the region is responsible for around 50% of the total volume of current waste-derived fuel exports. SUEZ’s modelling shows that there is a substantial regional treatment capacity imbalance, with the North of the country far better served than the South.

While there remains insufficient EfW plant capacity to pick up the slack, the high rate of landfill tax and the likelihood that waste will have to be moved much further distances for disposal in the UK’s remaining landfill, means that Britain’s businesses and taxpayers will be hit with higher waste disposal costs over the next decade, SUEZ says.

Treatment of residual commercial waste accounts for the majority of the capacity gap, requiring £5bn of private sector investment to close it, in addition to £3bn for supporting infrastructure (such as recycling and municipal) – a difficult prospect without coordination and positive policy signals from Government.

Defra, now under the leadership of Michael Gove, has historically downplayed the issue, SUEZ says. Despite what it calls a “unanimous agreement” across the recycling and waste management industry of a capacity gap, it says Defra’s modelling has consistently suggested that there is no problem.

“Recycled raw materials and energy generated from waste could play an important role within the UK’s emerging industrial strategy, but this requires a joined-up, long-term, stable, approach to infrastructure planning not the piecemeal system we have now which has failed to deliver sufficient, balanced, capacity across the UK.”

Critics of Defra’s model say it fails to take into account the effect of waste exports and that the Department’s data on waste arisings does not match that of industry.

CEO of SUEZ recycling and recovery UK, David Palmer-Jones said: “Our projections show that there is a serious long-term shortfall in the UK’s vital waste management infrastructure and a potential disaster scenario now looming in the event of a hard Brexit.

“Back in 2014 SUEZ warned government that the UK has, and will continue to have, a structural waste treatment capacity gap. Brexit will now exacerbate the problem.

Hard borders, import tariffs and a weakening Sterling will make waste exports to Europe, which the UK continues to rely upon, financially unviable. Instead, the waste we currently export in the absence of sufficient domestic energy from waste capacity, will be re-shored into remaining, expensive, UK landfill – at a high cost to British businesses, taxpayers and the environment.

Mr Palmer-Jones continued: “As a result of non-existent regional planning and the lack of a forward-looking national waste strategy, there are big regional gaps emerging in waste treatment infrastructure so we will see waste being hauled around the country at an increased cost to those living and working in regions without landfill or spare EfW capacity.

“SUEZ is not alone in making these projections. There is unanimous agreement among the recycling and waste industry that a domestic capacity gap exists. This is a chance for the new Environment Secretary, Michael Gove, to listen to the warnings of those at the coal-face and encourage his officials to take heed. The private sector cannot continue to take sole responsibility for an issue that should be one of Defra’s top priorities.

“Recycled raw materials and energy generated from waste could play an important role within the UK’s emerging industrial strategy, but this requires a joined-up, long-term, stable, approach to infrastructure planning not the piecemeal system we have now which has failed to deliver sufficient, balanced, capacity across the UK.

“Mr Gove and his colleagues at Defra have a real opportunity to work hand-in-hand with colleagues at BEIS and help us deliver the necessary infrastructure to produce sufficient energy to power 1.2m households – the equivalent of three Birminghams – or risk of doing nothing and allow the UK to take a giant step backwards by having to revert to landfill as a primary treatment for residual waste.

We have released these projections prior to the formal launch of the study because there is no time to waste. We urge Government to take note of our recommendations.”

SUEZ’s Mind the Gap 2017-2030 report will make the following recommendations to Government:

Government does not accept the view shared by the rest of the recycling and waste management industry that a capacity gap exists. Until Defra reviews its model and works with the private sector to agree the scale of the problem, no change will occur. This is a crucial first step.

UK recycling and waste management policy has been historically led by the EU. Once we leave the EU, what is the UK Government’s ambition and vision? Setting long-term targets supported by policy levers such as taxation, levies and incentives (see Recommendation 5), will be the key to unlocking more private sector investment in treatment capacity.

The Government should produce an updated Waste Management Plan for England. This plan must be coherent with, and fully integrated into, the proposed UK Industrial Strategy – driving resource efficiency and resource productivity through the UK economy.

Considering that the UK is searching for ways of bridging potential energy shortages in the years to come, making use of residual waste fuel to generate power and heat is an obvious opportunity. Energy produced from waste will generally be between 50% and 100% renewable and will therefore provide reliable green base load power to the UK market.

For too long the UK has relied on small-scale ad hoc waste surveys which do not provide comprehensive national coverage and soon lose their currency.  We urge Government to continue with the collaborative approach it has recently commenced, involving sector operators and the devolved administrations, to put in place a more robust data collection system.

Unlocking the significant private capital for the next generation of UK energy from waste facilities is contingent on the government committing to stable long-term policy and support mechanisms, so that companies have the confidence to plan for projects with an operating life of 20-25 years.  Frequent changes and amendments to renewable energy and decarbonisation support policies has drastically slowed the deployment of renewable energy and biomass projects and put future investment in these technologies at risk. Long-term visibility and stability are also needed with respect to the future trajectory of landfill tax and recycling targets.