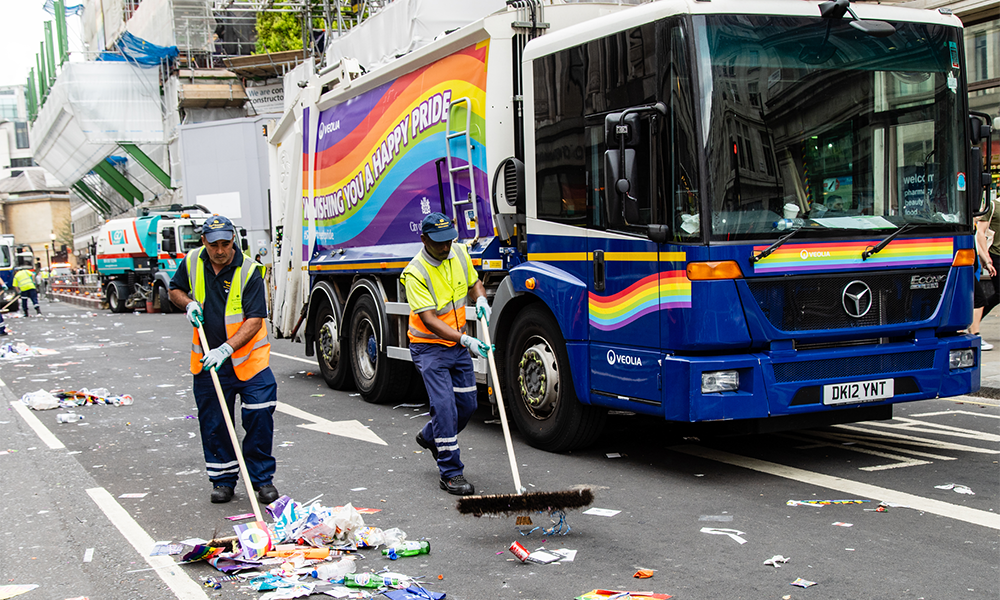 Veolia and Westminster City Council have given Pride-goers their most colourful clear-up to date, with rainbow collection vehicles, brooms and barrows used to clear over 55 tonnes of recycling and waste from the streets.

Pride is one of Westminster’s largest celebrations, with thousands of spectators joining in on the day’s fun.

Veolia manages the clear up operation on behalf of Westminster City Council, and to mark the 50th anniversary of the event, took great pride in switching some of their usual street cleansing equipment for multi-coloured alternatives.

This year’s Pride marks fifty years since the Stonewall Uprising and a half-century of LGBTQIA+ liberation.

Simon Raven Street Cleansing Foreman from Veolia said: “It was nice to support the LGBT+ community through our rainbow coloured equipment.

We were more than happy to deliver a colourful clean up, making sure the day’s spirit was carried out until the last of the recycling and waste was removed

“People were approaching us to take photos and some said we could have joined the parade, however we were more than happy to deliver a colourful clean up, making sure the day’s spirit was carried out until the last of the recycling and waste was removed.”

To clean up after the parade, Veolia deployed over 30 vehicles and 115 staff. They expect to have collected around over 55 tonnes of recycling and waste.

Recyclables collected from the parade route will be sent to Veolia’s Southwark recycling facility for sorting, and any non-recyclable waste will be sent to its SELCHP Energy Recovery Facility, to be turned into low carbon energy to heat and power local homes.

Helder Branco, Senior Contract Manager for Veolia in Westminster said: “The Pride Parade is a celebration of diversity and inclusion, and we’re delighted to play an important role in ensuring the day’s success.

“Our teams work tirelessly to ensure a safe and efficient clear up. All of the recycling collected will be sent to our Southwark recycling facility and non recyclable waste will be used for energy recovery, which means it is turned into a resource to heat and power local homes.”