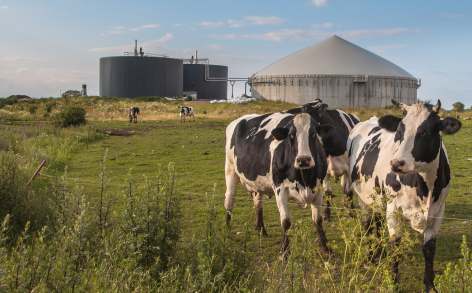 Green gas can make a key contribution to meeting the goals set out in Scotland’s first ever Energy Strategy, according to the UK’s trade body for anaerobic digestion (AD).

Charlotte Morton, Chief Executive of the Anaerobic Digestion & Bioresources Association (ADBA), said today: “The Scottish Government has set itself ambitious but necessary targets for generating renewable energy in its new Energy Strategy, and renewable heat and electricity produced through AD can make an important contribution to these goals, as well as reducing emissions from landfill, creating rural jobs, and helping to restore degraded soils.

“There are now over 50 operational AD plants spread across Scotland, recycling a range of wastes including animal slurries and manures, food waste, grass silage, sugar beet, and various grains and wheats from Scotland’s famous distilleries. With more than half of these plants commissioned within the last four years, farmers, businesses and government are increasingly seeing first-hand the multiple benefits that green gas delivers.”

“There are now over 50 operational AD plants spread across Scotland, recycling a range of wastes including animal slurries and manures, food waste, grass silage, sugar beet, and various grains and wheats from Scotland’s famous distilleries.”

AD is currently delivering 45 MWe of power and 11,000 m3/hr of heat in Scotland, with AD plants across the UK now having enough capacity to power over a million homes, according to ADBA.

The Scottish Government’s Energy Strategy, the first of its kind in Scotland, sets a new target for at least 50% of all Scotland’s heat, transport, and electricity consumption to be supplied from renewable sources by 2030.

The Strategy notes that biogas and biomethane produced through AD will have a role to play in helping to decarbonise Scotland’s energy system, and notes that existing biomethane sites in Scotland already produce enough gas to supply the equivalent of 85,000 homes.

Morton’s comments come ahead of the ADBA Scottish National Conference 2018, taking place in Glasgow on the 28th February.

Last year’s conference was the first dedicated solely to the Scottish AD industry, and this year’s event will focus on AD’s potential contribution to business and farming in Scotland, with Cabinet Secretary for Environment, Climate Change, and Land Reform Roseanna Cunningham MSP giving the keynote presentation on Scotland’s proposed new Climate Change Bill.