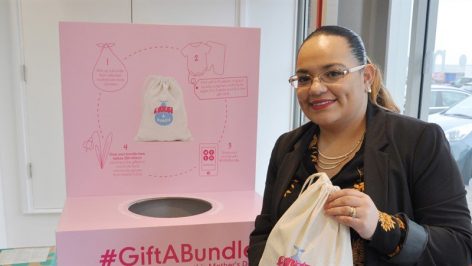 Hubbub and Mothercare aim to redistribute 65,000 pieces of baby clothing to 6,500 UK families through the nationwide expansion of Gift a Bundle.

The campaign will encourage households to create beautiful gift bundles of out-grown baby clothing, take them to one of the 42 participating Mothercare stores for redistribution on Mothers’ Day to local families. The expansion typifies Hubbub’s approach.

Research from Hubbub identified there is a whopping 183m items of outgrown baby clothing stashed away in UK homes. That is enough to provide over 250 items for each baby born in the UK every year. Redistributing this clothing will help families save money and benefit the environment.

The research discovered that parents often have an emotional attachment to baby clothing as they hold memories of their children growing-up. This attachment creates a reluctance to take the clothing to charity shops as it feels de-personalised. Instead people want to be assured that the clothing will be valued preferably going to local families who will benefit from the gift.

Hubbub wanted to test whether people would be willing to create gift bundles of baby clothing that would be of sufficiently high quality to benefit local families. A trial campaign was run in 2016 with a community in South East London and proved successful. Hubbub used this experience to refine the approach and to generate evidence of the environmental, financial and social benefits.

The trial encouraged Mothercare to run a campaign with 13 stores in 2017. They wanted to see what impact Gift a Bundle would have on their business. Would it be disruptive, would it increase footfall in stores, how would employees respond and would it build stronger connections to local communities?

The campaign was highly successful redistributing 20,000 items of clothing to 2,000 families and securing significant positive press and social media coverage. Mothercare decided to expand Gift a Bundle nationwide to 42 stores and to increase the spend on marketing.

“Hububb recognises that Gift a Bundle can benefit community organisations across the UK,” Hubbub said. “We created a ‘How to Guide’ that is freely available allowing any group to deliver the campaign.

“This has attracted attention from a wide range of organisations including nurseries, community groups and local authorities. We have also been working with a breadth of charities to identify families who will benefit most from the gift bundles that are collected.”

Hubbub believes that Gift a Bundle is a scalable model that could become an integral part of how Mothers’ Day is celebrated in the UK.

“We will measure the impact of the campaign in 2018 and explore whether there are other organisations who want to take it over to deliver in future years. This will give Hubbub freedom to create fresh, new campaigns for the future.”