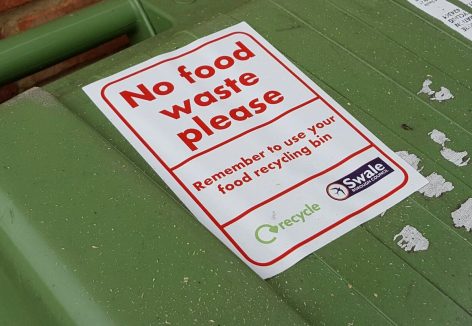 During the first half of 2017, six Kent districts (Ashford, Canterbury, Dover, Maidstone, Swale and Thanet) saw an impressive increase in food waste recycling of over 6%. At the same time, non-recyclable, residual waste dropped by over 4.5%, compared to the same period the previous year.

The six Kent councils, who are members of the Kent Resource Partnership (KRP), delivered a food recycling campaign over a three month period (January to March 2017) to engage with local residents and encourage them to make use of their weekly kerbside food recycling collection service.

The campaign saw 291,000 households receive a ‘no food waste please’ sticker on non-recyclable waste bins. This was supplemented with social media messaging and a number of food recycling roadshows which provided two-way dialogue between residents and Kent councils.

“We ran a successful campaign to tackle the problem. And we monitored the results, so we could report back to Kent’s residents. This work takes the Partnership one step closer to its target of 50% recycling by 2020.”

Residents were encouraged to highlight potential barriers to recycling their food, and council staff offered helpful hints and tips to food recycling within the home, as well as practical help to get people started, like free food recycling caddies and bags. They also helped explain the wider environmental benefits to recycling.

Analysis of the tonnage data from the six Kent councils over the six month period (including three months post-campaign) showed:

The campaign was aimed at tackling a problem identified by the Kent Resource Partnership’s residual waste audits which took place in 2015 showing that between 23% and 37% of food waste was being thrown away in the residual waste collections, even though the majority of Kent councils offer a weekly kerbside food recycling collection service.

Using the ‘Recycle Now’ resources from the recycling charity, WRAP, Kent councils and their respective contractors delivered the ‘no food waste please’ stickers, with impressive results.

Cllr Rory Love, Kent Resource Partnership Chairman, said: “This is partnership working at its best. We identified the problem of too much valuable food waste being thrown away in non-recyclable waste bins.

“We ran a successful campaign to tackle the problem. And we monitored the results, so we could report back to Kent’s residents. This work takes the Partnership one step closer to its target of 50% recycling by 2020.”

Linda Crichton, Head of Resource Management at WRAP said: “WRAP is pleased that the KRP used Recycle Now artwork in its local campaign to increase food recycling. It’s great to see the campaign produce such impressive results mirroring similar food recycling campaigns across the UK, which have included the use of ‘no food waste please’ bin stickers.”

During the same period of the food recycling campaign, two areas in Kent (Dartford and Tonbridge & Malling), which currently don’t provide a separate weekly food waste collection, delivered a campaign to their residents focused on ‘avoidable’ food waste.

A ‘Fresher for Longer’ food wheel was sent to 88,500 households across both areas. The food wheels provided residents with helpful hints and tips on better ways to store various food items such as bread, fruit, vegetables, potatoes and cheese, with the aim to keep fresher for longer.

Key highlights from the tonnage data across both Kent councils over the same six month period (including three months post-campaign) showed:

Following the campaigns, the KRP has worked with key partners to keep up communications with residents, promoting other national seasonal food waste campaigns such as Hubbub’s #TravellersChecks and #PumpkinRescue.