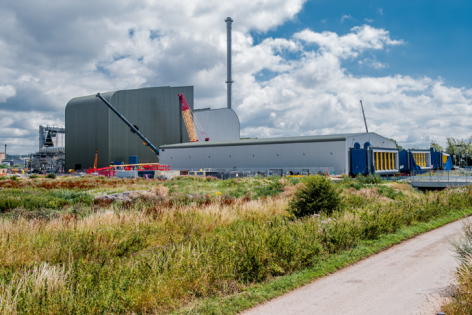 The Bioenergy Infrastructure Group (BIG) and Peel Environmental have announced the first major energy milestone – the first generation of low carbon energy from the Ince Bio Power biomass facility at the Protos energy hub in Cheshire.

The facility, which will use waste wood to power the equivalent of 40,000 homes for the next 20 years, will help save around 65,000 tonnes of CO2 per year, the companies behind its operation have said.

BIG, a specialist investor and operator in the biomass and waste-to-energy sector, and Peel Environmental, a UK infrastructure developer, announced that the 21.5MW biomass facility – Peel’s £700m flagship energy hub located within the newly created Energy Innovation District in Ince, Cheshire. – had produced its first low-carbon energy. It is the first active facility at the Protos site, which is expected to deliver over 3,000 jobs once operational and a £350 million boost to the economy per annum. Its is BIG’s second largest asset by production capacity within its wider portfolio of bioenergy facilities across the UK.

Protos – approved for energy production, general manufacturing and distribution uses – is Peel Land and Property’s flagship energy site. It will bring together energy generators alongside energy-intensive industries and relevant supply chains. Phase One infrastructure has now been completed, with the development site now open for business.

Neil Bennett, Commercial Director at Bioenergy Infrastructure Group, commented: “As one of BIG’s first investments in the bioenergy sector, this major achievement at Ince Bio Power, and within the Protos hub, is an important step in delivering our wider strategy of generating more than 200MW of low carbon power from waste – sustainably supporting the UK’s increasingly electricity-intensive economy, regional economic development and local job creation.”

Philip Cox, Chief Executive of the Cheshire and Warrington Local Enterprise Partnership, added: “The launch of BIG’s new biomass facility at Protos represents a major landmark investment not only in Protos but in Cheshire and Warrington. Energy is increasingly a top priority for business and we have some of the country’s most energy intensive businesses in our region. BIG’s new biomass facility is a very welcome low carbon addition to our energy mix, ensuring that we are providing secure, affordable and clean energy, which is vital to our continued economic growth.”