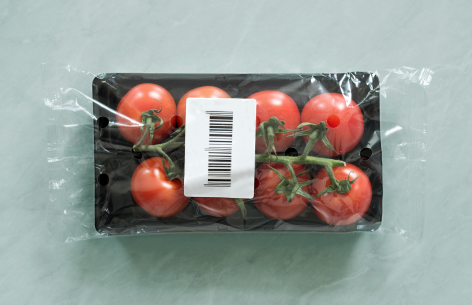 A rise in plastic food packaging is “failing to reduce Europe’s growing food waste problem”, and in some cases may even be fuelling it, according to new research by Friends of the Earth (FoE).

The study shows how annual per-capita use of plastic packaging has grown simultaneously with levels of food waste since the 1950s – now at 30kg and 173kg respectively.

The review of available evidence published by Friends of the Earth Europe and Zero Waste Europe, on behalf of the Rethink Plastic alliance, also reveals that big retailers are driving food and plastic packaging waste in Europe through practices such as food grading standards, and packaging food in multipacks and small format packs.

One study showed that chopping green beans to fit plastic packaging resulted in 30-40% of the beans being wasted.

37% of all food sold in the EU is wrapped in plastic, the study found – the most widely used packaging material.

The cost of food waste in the EU is estimated at €143bn each year, equivalent to the annual operational budget of the EU.

Meadhbh Bolger, resource justice campaigner at Friends of the Earth Europe, said: “The results are in: wrapping, bottling and packing food in plastic doesn’t systemically prevent food waste, and sometimes even causes it. It’s a red herring that’s causing terrible pollution of our land, sea and air.

Julian Kirby, Friends of the Earth plastic campaigner for Friends of the Earth England, Wales and Northern Ireland said: “We already knew that plastic packaging is harming our environment and wildlife – now it appears its role in avoiding food waste may have been over-estimated too.

“The UK government must help stop this pollution crisis by phasing out the vast majority of single-use plastics within five years, as part of an action plan to end the use of all but the most essential plastics.”

The study also looks at how the environmental impacts of plastics can be systematically underestimated when making policies which impact food packaging – including some in the new measures being developed by the European Commission to tackle plastic pollution.

With the current use of the “Life Cycle Assessment” (LCA) methodology, the Commission is leaving the door open to policies that fail to tackle plastic pollution, it says.

Ariadna Rodrigo, Sustainable Products Campaigner at Zero Waste Europe said: “The packaging industry and the European Commission are not practicing sound decision making when it comes to food packaging.

“Their methodology, which often ignores the impacts of plastic waste, result in to conclusions that favour complex food packs which are impossible to reuse or recycle. The result is the promotion of plastic packaging designed for landfill and incineration.”

The findings come as the European Commission prepares legislation to tackle plastic pollution, with a number of measures including a draft law on single-use plastics expected before the summer.

Commenting on the study, Paul Vanston, CEO of the Industry Council for Packaging & the Environment (INCPEN) said the fundamental challenges of food waste and plastics waste that are highlighted in the FoE report are “ones for all societies across the globe to step up to the plate to tackle.”

He said INCPEN supports the global and continental programmes to tackle food waste and plastic waste, including delivery of the United Nations’ Sustainable Development Goals (SDG).

“More now needs to be done to considerably reduce the environmental and financial costs of household food waste. Despite the challenges that remain, the UK is now often cited as a global leader in food waste reduction as a result of the efforts of WRAP and the supply chain.”

“In terms of the UK, INCPEN continues to welcome and support the Government’s 25-Year Environment Plan. We also need to consolidate on the extensive work since 2007 in the UK to reduce food waste, which WRAP has led, which has seen substantial progress on reducing waste in the supply chain.

“More now needs to be done to considerably reduce the environmental and financial costs of household food waste. Despite the challenges that remain, the UK is now often cited as a global leader in food waste reduction as a result of the efforts of WRAP and the supply chain.”

INCPEN said it believes the “Fresher for Longer” project work needs to be updated to understand consumers’ perceptions and behaviours in light of the many developments on global environmental understanding that have taken place in the last five years.

“This includes that the UN SDG’s themselves were a welcome development as recently as 2015, and important interventions such as Blue Planet 2 and Sky Oceans Rescue,” he said.

“Nevertheless, INCPEN also feels the views of organisations like the Green Alliance need to be heard carefully in terms of not losing sight of the valuable functions packaging plays whilst being determined to step-up to the challenges.”

The “Fresher for Longer” project carried out in 2013 across several organisations linked the issues of food waste and the role and value of packaging. It showed consumers’ perceptions and actions were complex and included: