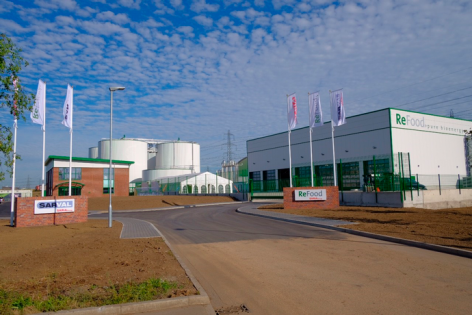 A new state-of-the-art anaerobic digestion (AD) facility was officially opened in Dagenham on Friday (7 July). Operated by ReFood, part of the SARIA Group, site is capable of processing more than 160,000 tonnes of food waste every year, generating 14m cubic metres of biogas.

ReFood says the site will act as a “showcase of industry-leading food waste recycling technology” and it represents one of the most important single site investments in the history of the SARIA Group. It will convert inedible food waste, collected from customers in and around London, into sustainable biofertiliser and enough renewable energy to power 12,600 homes per annum.

As well as displacing 73,600 tonnes of CO2, the equivalent of taking 14,431 cars off the road, ReFood Dagenham will support Transport for London’s (TfL) Clean Air Action Plan through the generation of biomethane for gas-powered vehicles. At a later date, state-of-the-art gas upgrading equipment may also be installed on site to supply high quality road fuel.

Philip Simpson, commercial director at ReFood, commented: “Opening ReFood Dagenham comes as part of a strategic ambition to recycle more than one million tonnes of food waste by the end of 2017 – a milestone that we are on track to achieve.”

“Since our first year of production in 2012, national operations have grown by more than 250%. ReFood Dagenham will play an important role in furthering this success, providing an environmentally-friendly waste management solution for customers in London and the surrounding areas.”

Shirley Rodrigues, Deputy Mayor (Environment and Energy) who opened the site, added: “We’re committed to helping drive up London’s recycling rates, as well as making London zero carbon by 2050. This new facility, the first of its kind in London, is exactly the type of solution we need to help achieve this. Not only will it deal with London’s food waste, but it will also produce clean biogas to help cut the carbon emissions of the gas grid.”

ReFood Dagenham is the company’s third facility in the UK, adding to existing sites in Doncaster and Widnes. Alongside state-of-the-art AD operations, the site will also feature a transfer facility for Category 3 animal by-products (ABP), collected from butchers’ shops across the region.